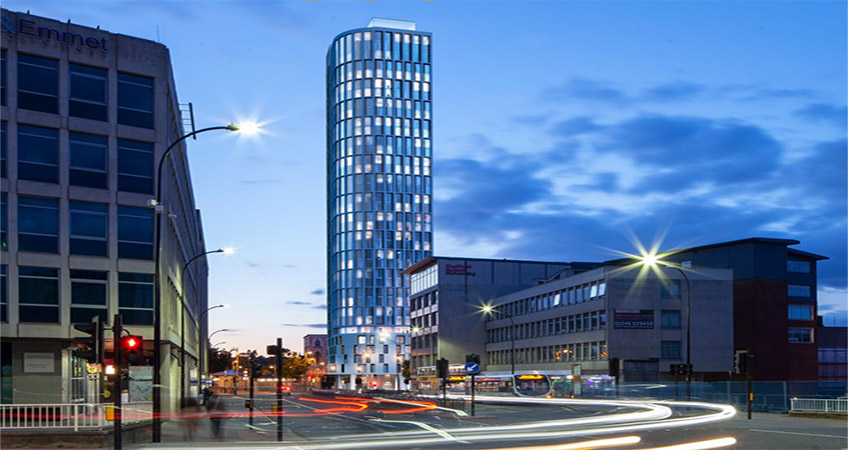 Hodder + Partners has submitted plans for a 38-story residential tower in central Sheffield that could become one of Yorkshire’s tallest buildings. The Manchester-based practice has applied to demolish a former Primark store in the city’s Castlegate district and replace it with 206 flats.

At 117 meters tall, Kings Tower would loom above the 101 meter-high St Paul’s Tower in Sheffield and the 112-meter Bridgewater Place in nearby Leeds.

However, it enters a race against several other developments across Yorkshire vying to become the county’s tallest, including Feilden Clegg Bradley Studio’s 40-story Globe Waterside Tower in Leeds, which was approved in 2018 and could rise to 136 meters.

Backed by developer SFGE Properties, Hodder + Partners’ proposals for 51-57 High Street, close to the city’s famous but now filled-in Hole in the Road, feature one- and two-bed flats, as well as duplex apartments.

The development would also include a 337-square-meter commercial unit at the ground floor level for a shop or café.

The practice said in planning documents for the final scheme that the tower would “create a visual identity on the skyline” and “cement the regeneration of the area.”

Hodder + Partner chairman Stephen Hodder said the design of the scheme “reflects the site’s significance and its ability to kick-start this part of Sheffield with a compelling piece of architecture.”

“We believe Kings Tower will send out a very positive message about Sheffield City Council’s ambitions for the economic wellbeing of the city,” he added.

SFGE Properties director Tony Marsden said: “Thanks to Kings Tower, it will be possible for more people to live in the center of Sheffield in high-quality apartments and deliver a new retail offering in the Castlegate area, already one of the most accessible places in the city.”

Subject to planning, work could start on site next year, with Kings Tower completed and ready for occupation by autumn 2023.