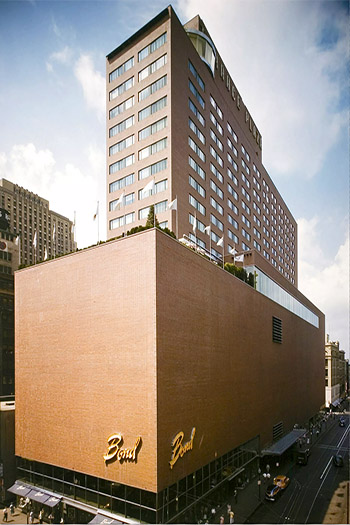 The historic Terrace Plaza Hotel in downtown Cincinnati was designed by the pioneering Natalie de Blois, and was the first major project for Skidmore, Owings & Merrill.
30 September 2020 | Cincinnati, United States

A Modernist Cincinnati hotel designed by a pioneering woman architect is on this year’s 11 Most Endangered Historic Places list, per the National Trust for Historic Preservation. The 2020 11 Most Endangered list comes at a time of often paralyzing tumult, heartbreak, and dissonance. Yet despite the gloomy scenarios—imperilment, abandonment, decay, demolition—evoked by the very name of the list, the National Trust has never meant for the annual lineup to serve as a mournful sendoff or preemptive eulogy. Rather, it serves as a call for action while signaling that the 11 under-threat historic sites spotlighted each year will, statistically, likely be saved. But not without help.

In the 33-year history of the Most Endangered Historic Places list, 95 percent of the more than 300 sites classified by the National Trust as being at imminent risk of destruction have ultimately been spared from the wrecking ball and further ruin due in part to their placement on the list and the widespread attention generated by it. It’s an excellent track record and there’s a good chance that the collective fate of this batch of diverse and distinctly American landmarks will be no different despite landing at a time when the motivation to organize and turn out of many is focused elsewhere.

Of particular architectural interest on the 2020 list is the Terrace Plaza Hotel in downtown Cincinnati. Designed top-to-bottom in the late 1940s by trailblazing female architect Natalie de Blois, the 18-story hotel tower was the first major project of any kind for then-green Chicago firm Skidmore, Owings & Merrill (SOM), the first International-style hotel in the U.S., and one of the first American hotels to debut following World War II when it opened in 1948. (Manhattan’s Lever House, another early SOM landmark, came four years later.) The completion of the Terrace Plaza, boasting art by the likes of Joan Miró and Alexander Calder, marked not only the beginning of an iconic American architectural firm, but the start of an illustrious, yet at times unheralded career of an architect who busted professional gender norms of the era and opened new doors for female architects.

Today, the Terrace Plaza, having sat largely in a state of abandonment for the better part of a decade, is experiencing what the stateside arm of Modernist architecture preservation advocacy organization Docomomo has referred to as “demolition by neglect.” While not currently at risk of being razed and having benefitted from determined local preservation efforts, the hotel, listed on the National Register of Historic Places in 2017, still remains in a state of limbo.