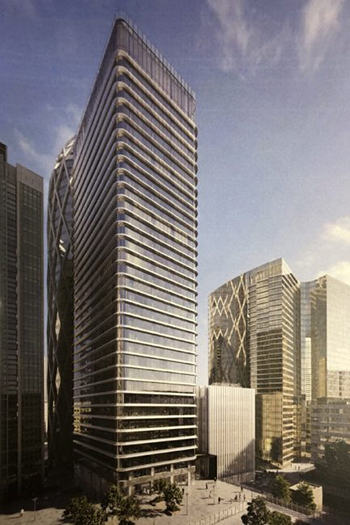 Unoccupied since 1998, 24 months of work will be required to erect new floors and rebuild the neighboring building.
13 December 2019 | Courbevoie, France

On 4 December 2019, developer Paris La Défense organized a meeting with local residents in Courbevoie about Tour Aurore, who were informed that the redevelopment of the building would be finished by the end of 2021.

Unoccupied since 1998, located at Place des Reflets near the Esplanade de La Défense Métro station, 24 months of work will be required to erect new floors and rebuild the neighboring building, formerly occupied by BNP Paribas.

Surprised by the speed of the works, residents were delighted with this news during the meeting, even though they fear the nuisance that could be generated by the work.

"There is a desire both for the developer and for residents to launch an important project," said Olivier Lavigne-Delville, director of Aermont, an investment fund and owner of towers at La Défense.

"There was almost a difficulty for the business district to have a tower like this, abandoned,” he added.

"The project will make it possible to create links between the City of Courbevoie and the slab, which is not always the case, which allows a better service," he continued. "This is a complete restructuring of the tower, topped by six additional floors."

"The advantage of this project, because we choose the restructuring, in particular, is that things already exist in the structure, which will allow us to proceed faster than on other projects where we must start from zero and work an additional 12 months,” said the director of Aermont.

Residents, however, remained concerned about the noise potential from the long construction process.

"We already had some of the construction, and that lasted about a year, and if I'm not mistaken, we should be expecting the same thing in terms of noise and delay,” said Lavigne-Delville, in response to those concerns, promising that all measures will be taken to limit them.

For more on this story, go to La Gazette de la Défense.