Mixed-Use Tower to be Built in Adelaide’s CBD 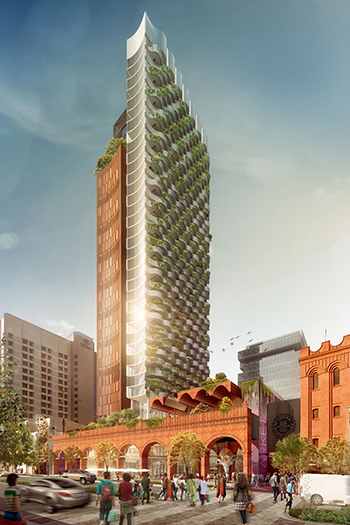 The project will include an office tower, retail space, a 249-room hotel with up to 210 residential apartments, 15 percent of which would be designated affordable.
13 December 2019 | Adelaide, Australia

A 35-story mixed-use tower will form part of the City of Adelaide’s plans for a AU$400 million (US$275 million) revamp of the Central Market Arcade.

Redevelopment plans of the central business district (CBD) project include an A-grade office tower, retail space, a 249-room hotel with up to 210 residential apartments, 15 percent of which would be designated affordable. The project is located only steps away from the Victoria Square station on the Glenelg tram line.

The City of Adelaide announced ICD Property as a development partner on the CBD project, following a two-year-long expression of interest process. The development is touted to break ground in 2021, subject to further approvals.

The announcement will see the company join with Nanshan Singapore in a joint venture partnership on the project, alongside property development firm Sinclair Brook and Woods Bagot on the design.

ICD Property will now work with Woods Bagot in order to gain development approval. The precinct also has plans to deliver a central hall, public rooftop garden, and a childcare center.

Lord Mayor of Adelaide Sandy Verschoor, said the council-led project, last developed in the 1960s, aims to create a food and wine destination that “builds on the Central Market’s importance as a South Australian icon and provide better connections to Victoria Square and the surrounding streets.”

In Melbourne, the developer appointed Hickory to construct its 65-level skyscraper known as Aspire, with a construction contract valued at around AU$180 million (US$124 million) for the CBD-based “super tower.”

In November 2019, ICD Property won approval from the City of Sydney for the first stage of the City Tattersalls Club redevelopment.

Plans include a 48-story tower, located at 194-204 Pitt Street, which will comprise around 246 residential apartments and a 100-room hotel above the heritage Sydney CBD site.