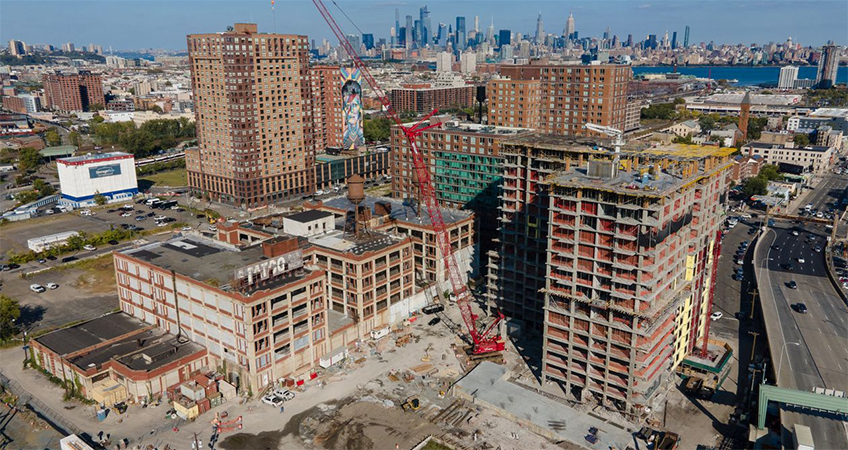 Three towers rising at least 25 stories and the restoration of an old metal can company building could bring nearly 1,100 new residential units to Jersey City’s Soho West, the once industrial neighborhood near the Holland Tunnel being transformed by a recent building boom.

Statco, a four-phase project being developed by Manhattan Building Company, is planned for several lots between 14th and 16th streets, bound by Coles and Monmouth streets.

Phase 1 of the project, which has already received Planning Board approval and is underway, will see the construction of a 25-story tower containing 350 residential units, 307 parking spaces, and retail space.

The final phase will see the construction of a 26-story tower with 200 residential units.

The developer is seeking final plan approval for phases 2 through 4, and requesting to add another 99 residential units to the development, in addition to roughly 19,000 square feet (1,765 square meters) of retail space and 202 off-street parking spaces.

If approved, the project would expand to 1,099 residential units.

Details of the large-scale project were taken from documents submitted to the Jersey City Planning Board by the developer. John Palumbo, vice president of real estate development at Manhattan Building Company, declined to comment on the project.

The plans, which include no mention of affordable housing, feature what it refers to as community benefits, including the construction of two public parks and a “public use facility.” Details on the public use facility were not provided.

It also includes the construction or improvement of three nearby streets: Monmouth Street, 15th Street and 16th Street.

The project comes to the Soho West area—south of Hoboken, west of New York—which has become one of Jersey City’s hottest neighborhoods for new development in recent years.

A pair of 12-story buildings on Coles Street and a 21-story tower nearby gained Planning Board approval earlier in 2020. Together, the two projects will bring nearly 1,200 new units of housing to SoHo West, which is already home to the Cast Iron Lofts and SoHo Lofts.

Residents of the nearby Holland Gardens public housing complex are expected to get new digs under an ambitious plan that calls for the current complex to be redeveloped as a mixed-income high-rise. The Jersey City Housing Authority proposal calls for at least 500 units to be developed at the current site, in addition to units for all Holland Gardens residents.

Even the old St. Lucy’s Church and its adjacent homeless shelter have been designated for redevelopment.

Construction on Coles Street Park, one of the community givebacks included in the Statco plan, began in November. The US$2 million park between 16th and 18th streets will be completed in conjunction with Phase 1.

Emerson Park, the second of the two new parks, will be located on a triangular plot just south of 14th Street.

The project will also see surrounding roadways raised and improvements made to the sewer system, resulting in less localized flooding, officials say.

Restoration and adaptive reuse of the Continental Can Company building is also classified as a community benefit.

The Continental Can Company, which started in 1904 in Chicago and Syracuse, was once one of the world’s largest packaging firms. By 1921, the company had expanded to opening multiple operating plants in cities across the

For more on this story, go to NJ.com.