Former Hotel Pacific to be Demolished in Tokyo 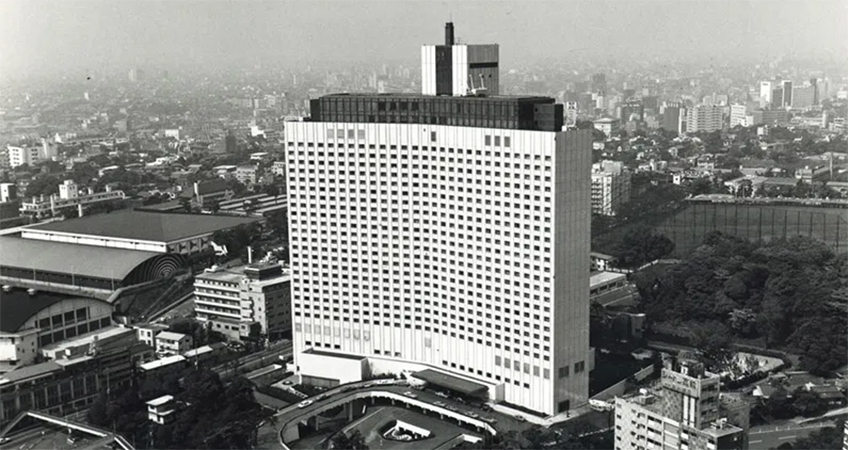 The mixed-use and oddly-named Shinagawa Goos building on the western side of Shinagawa Station officially closed its doors on March 31, 2021 ending 50-years of operations.

The 30-story building opened in 1971 as Hotel Pacific Tokyo, with 954 rooms. It was designed by Sakakura Associates, the company founded by modernist architect Junzo Sakakura. The total construction cost was said to have been ¥16 billion. The pearlescent exterior was covered with 3.6 million Arita ware porcelain tiles. Room rates were 4,000 Yen a night, with a penthouse suite with spiral staircase going for 100,000 Yen a night.

The hotel was owned by railroad company Keikyu Corporation and operated by their hotel subsidiary. Hotel Pacific closed in September 2010, but re-opened as Shinagawa Goos, with the Keikyu EX Hotel Shinagawa hotel, wedding, restaurants, and retail shops in April 2011.

From 1979 to 2008, the hotel was operated in a tie-up with Le Meridien. The addition of Shinagawa Station to the one of the Tokaido Shinkansen bullet train stops in 2003 made this location ideal for the hotel. However, the ageing hotel faced growing competition with the neighboring Prince Hotel, and, with the onset of the global financial crisis in 2008, saw room vacancies rise to a level where it was no longer profitable to operate. There were talks of converting the existing building into office space and meeting rooms but it was later renovated into a business hotel.

Back in April 2020, Keikyu announced plans to redevelop the hotel site in a joint venture with Toyota Motor Corporation. The new project would see a 200,000-square-meter commercial tower with office, retail and hotel space, with Toyota taking up the office floors. The 120-meter tall tower is expected to be completed sometime around 2024.

The site was originally home to the Takanawa Minamicho Imperial Palace up until WWII. The adjoining lot, now the Grand Prince Hotel, was also a former palace residence acquired by Seibu Railway.