Stepped And Cantilevering Towers Top Out in Brooklyn 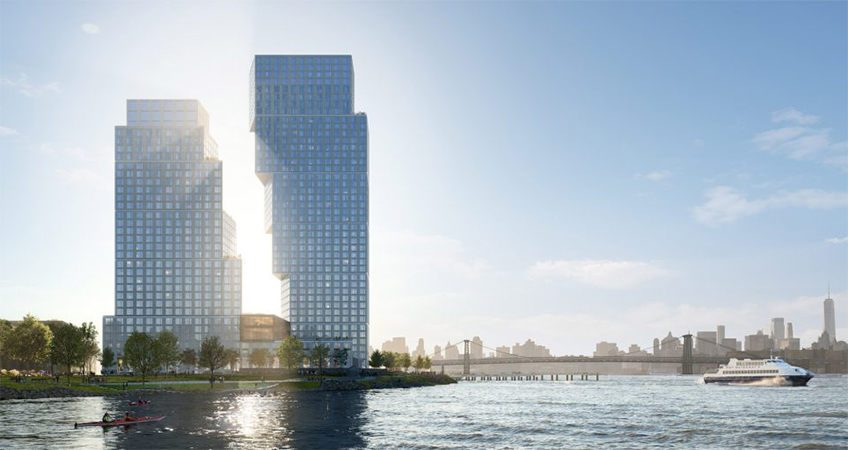 Construction has topped out on 227 West Street, a pair of 30- and 40-story residential towers in Greenpoint, Brooklyn. Designed by OMA with Beyer Blinder Belle as the architect of record and developed by Brookfield Property Partners and Park Tower Group, the towers are part of the 22-acre (8.9-hectare) Greenpoint Landing development along the East River. James Corner Field Operations is the landscape architect, DeSimone Consulting Engineers is the structural engineer, Thornton Tomasetti is the façade consultant, and Highbury Concrete is responsible for building the superstructures.

Photos show the state of progress since an update in late July 2020, when the first couple of floors had just begun to rise above street level. Now construction has topped out and façade installation is progressing on the pair of towers, which feature a dramatic cantilever and corresponding setbacks, creating a puzzle-piece effect. At its pinnacle, the taller structure cantilevers 48 feet (14 meters) out from its base.

From afar, 227 West Street joins a large collection of nearby construction sites that line the Greenpoint, Williamsburg, and Hunters Point waterfront. These sections of the East River riverfront have been undergoing one of the largest transformations of New York City outside of Manhattan that will add thousands of new homes, both at market rate and with a considerable amount as affordable hosing units. Other functions include retail space, commercial office space, communal facilities, grade schools, and waterfront esplanades on plots of land that were largely vacant and underdeveloped.

227 West Street’s amenities include a swimming pool and a fitness center, both housed in the adjoining podium section. The property will also include 8,600 square feet (798 square meters) of retail space. Thirty percent of the 745 rentals is planned to be “income-targeted” apartments marketed in accordance with the Affordable Housing New York program. Greenpoint Landing as a whole is planned to yield 5,500 residential units, with 1,400 designated for permanent affordable housing,

For more on this story, go to YIMBY.