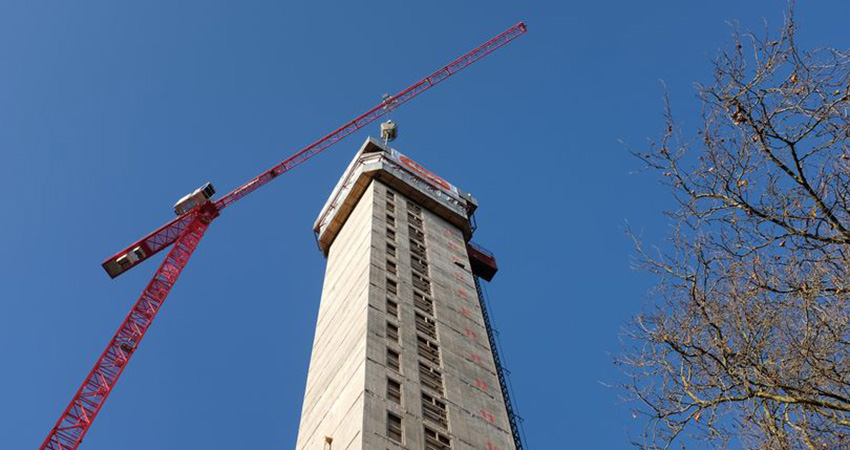 Currently under construction, the service tower is part of Castle Park View in Bristol, which will be the tallest building the city has ever seen.
10 January 2020 Bristol, United Kingdom

A record which has stood in Bristol for 148 years has finally been broken.

The moment came when one of the huge cranes in Bristol city center lifted the first of a series of steel uprights in place at the top of a service tower that is currently under construction.

Although the Castle Park View tower is still a couple of years from being completed—the service tower that will make up one corner of the building has now officially become the tallest building Bristol has ever seen.

The building now stands at a height of 98 meters AOD—a construction term for above ordnance datum, the ground level height decreed by the Ordinance Survey.

Workers returned after the Christmas holiday to finish off the last of the 26 stories on the corner service tower.

Castle Park View technically broke the record in the final week before Christmas 2019, the moment upright support was secured in place to take the structure beyond 89 meters tall.

But in 1446, the spire was struck by lightning and collapsed, leaving a truncated tower end. There are no records of how tall that left the church, compared to other churches in the city, so it is impossible to say for certain which was the tallest building in Bristol for 330 years after that lightning strike.

But then, in 1776, St Nicholas’ Church was constructed with a spire of 60 meters and that became the undisputed tallest building in Bristol.

The next time the record was broken was in 1872, when the restoration of the spire of St Mary Redcliffe Church took place, and the spire was topped out at 89 meters.

No other building in Bristol has ever been taller, until now.

Even the modern tower blocks built in Bristol in the past four or five decades have come close, but not passed St Mary Redcliffe, until now.

Castle Park View is being built almost opposite Castlemead, the second tallest structure in Bristol. That office block is 80 meters tall, has 19 stories, and was finished in 1981.

Most other tall buildings in Bristol are between 60 meters and 70 meters tall, including the Eclipse Tower on the other side of the road from Castlemead, the Wills Memorial Building, Colston Tower, One Redcliff Street and the spire of Christ Church in Clifton.

What will Castle Park View be?
The very top of the tower will be 98 meters above ground, but the final six meters of that will be a "frame," as can be seen in the artist’s impressions of the building.

The roof itself is on the 24th story, at 92 meters above ground, and the building will include what effectively will be an underground car park too.

Inside will be 375 homes on land that was previously the headquarters of the ambulance service in Bristol, on the corner of Castle Park.

How does this compare to other cities?
When the Victorian builders put the finishing touches to the very top of the spire of St Mary Redcliffe, it is difficult to imagine they would have thought a building could be taller in Bristol.

But the rush to build up above 100 meters, which began in Britain in the 1960s and continues to this day, has passed Bristol by.

Even this new holder of the tallest building Bristol has ever seen is still smaller and below 100 meters.

The list of other cities in Britain which have buildings taller than 100 meters is as follows: Brighton, Leeds, Birmingham, Swansea, Liverpool, Manchester, Salford, Sheffield, Portsmouth, and London. But still not Bristol.

Will Bristol go taller?
It seems unlikely just yet.

Castle Park View is 26 stories right now - and while there are three other buildings planned in the city that will go above 20 stories, none are designed to be taller.

The tallest block of student accommodation at the Temple Island site being developed by the University of Bristol was planned to be 25 stories and to reach a height of 94 meters, but those plans were scaled back to 21 stories.

The really tall and as-yet-unbuilt tower that is part of the Redcliffe Quarter development is 23 stories and "just" 84 meters.

A plan to build a 22-story block of flats as part of the Bedminster Green project was scaled back to "just" 16 stories late last year.

In 2018, Mr Rees launched a consultation on new urban living proposals and said: “I want Bristol’s skyline to grow.

“Years of low-level buildings and a reluctance to build up in an already congested city is something I am keen to change,” he said.

For more on this story, go to Bristol Post.