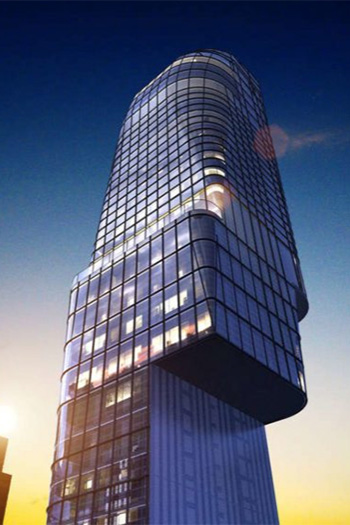 Construction is now above street level at 58 West 39th Street, aka H Hotel W39, in Midtown. Designed by Peter F. Poon Architect and developed by Wei Hong Hu of H Hotel LLC, the 435-foot (132-meter) 29-story structure is rising from a narrow plot below Bryant Park between Fifth and Sixth Avenue.

Photos show the ground floor and second story in the process of formation. The reinforced concrete columns and floor slabs are being supported by a thick web of temporary supports.

The rendering shows a futuristic, glass-clad design with a dramatic cantilever high above street level, much like the Central Park Tower. Almost all the corners of each floor plate appear to be curved, while the final levels culminate in a rounded parapet. The grid of mullions further accentuates the idiosyncratic shape of the structure.

The development will contain a total of 56,000 square feet (5,202 square meters), with 41,500 square feet (3,855 square meters) of commercial space and 65 hotel rooms, meeting rooms, a fitness center, and a hotel lobby along West 39th Street. The closest subway station is at the end of the street at the corner of Sixth Avenue with access to the B, D, F, M, and 7 trains. Times Square is a short walk from the hotel, while the Port Authority Bus Terminal is only two avenues away to the west.

A completion date for 58 West 39th Street was posted on the construction fence for winter 2020.