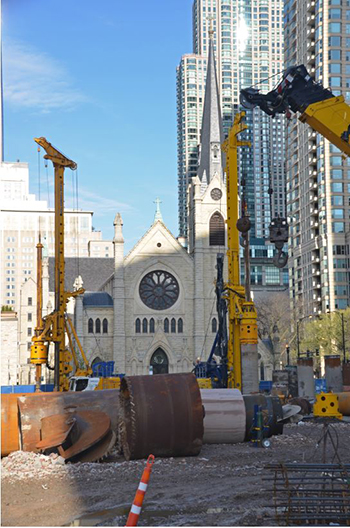 That marked the highest point of construction in Chicago in more than a decade, and it brought Chicago’s Magellan Development Group closer to its planned spring 2020 completion of what will become the city’s third-tallest skyscraper.

Topping out the 1,191-foot-tall (363-meter-tall) Vista Tower came more than a decade after Trump International Hotel & Tower reached its full height in August 2008, in the throes of a real estate crash. Trump’s 1,389-foot-tall (423-meter-tall) condo and hotel tower, Chicago’s second-tallest building, was completed in 2009.

The 1,451-foot (442-meter)-tall Sears (now Willis) Tower topped out in May 1973 and was completed the next year. It was the world’s tallest building for 24 years, but has since been surpassed by 16 skyscrapers — all but one of which are outside the United States.

Magellan and its Chinese investment partner, Dalian Wanda Group, broke ground in September 2016 on the $1 billion Vista project. The Studio Gang-designed condominium and hotel tower is near the Chicago River and Lake Michigan, at 303 E. Wacker Drive.

The Vista will be joined on the Chicago skyline with another tall building on the city’s North Side.

Architecture firms Goettsch Partners and Hartshorne Plunkard Architecture the groundbreaking on April 26 for One Chicago Square, a new, two-tower luxury residential and mixed-use complex designed in partnership by the two firms and led by JDL Development. The official ceremony for the project, located at 23 West Chicago Avenue in Chicago’s River North area, marked the start to the planned 41-month construction of the full-block development.

One Chicago Square will create approximately 2.2 million square feet (204,000 square meters) of new residences, offices, parking and retail space, including a flagship Whole Foods Market, along with such amenities as a premier Life Time fitness and wellness center, a restaurant, and a large roof garden on top of a podium building.

The 76-story, 295-meter main tower anchors the new development’s southeast corner at State and Superior streets, and will contain 276 apartments and 77 condominiums. Set back approximately 45 feet (14 meters) along its eastern side, the tower design creates a new urban park that provides a buffer from street activity as well as a sanctuary and amenity for residents, patrons and the public, including visitors to Holy Name Cathedral across State Street. The tower is composed of five vertical, rectilinear bars that drop off at varying heights as the program mix changes. The setbacks allow for multiple large terraces and create a slenderer form as the tower rises. Expressive fins varying in width reinforce the verticality of the building, giving the façades a distinct texture. At the tower base, the residential lobby, amenity spaces and a large terrace open up to the urban park.

The second tower, 49 stories and 175 meters tall and containing 459 apartments, anchors the northwest corner of the development at Chicago and Dearborn streets. Similar to the main tower, the building features roof terraces formed by the tower setbacks that provide private outdoor living spaces for residents. The podium is wrapped with activated functions, including 68 additional apartments, as well as the Whole Foods Market, Life Time fitness center, office space, event spaces  and restaurant. Private residential amenities on the 10th floor extend out onto the upper podium roof deck, which provides an unusually large outdoor amenity in the heart of the city and overlooks the expansive series of pool decks offered by the fitness and wellness center. To bring circulation off the street and support logistics for the various building functions, all traffic, services and parking for the development are enclosed and controlled within the podium via a covered auto court, a truck turntable on the ground-floor loading dock, and basement loading areas.

For more on this story go to the Chicago Tribune and Goettsch Partners.