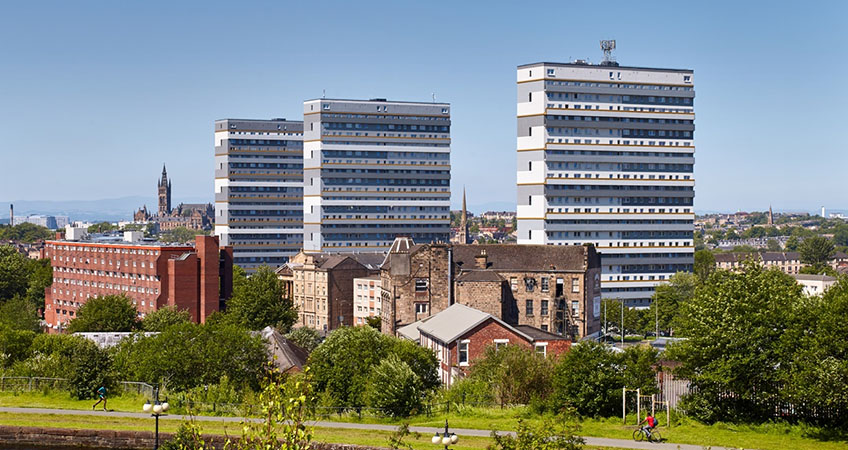 At a time when many high-rise residential buildings are being demolished, a renovation of Cedar Court in the North West of Glasgow demonstrates that some high-rise towers can provide sustainable affordable housing for the future.

Throughout the 1960s and 70s, thousands of Glasgow citizens were relocated to hastily-built high-rise estates, usually on the periphery of the city.

Glasgow has demolished almost one-third of its tower blocks during the past 15 years, most dramatically suggesting in 2014 that it would blow up three tower blocks at the Red Road development and beam the spectacle live during the opening ceremony of Glasgow’s Commonwealth Games—as a “bold and dramatic statement of intent from a city focused on regeneration and a positive future for its people.” The idea, however, was widely ridiculed, and the proposal dropped.

The city has since adopted a new approach to its high-rise housing blocks, saving and refitting many to give them a new lease of life. There also seems to be a more progressive attitude toward community participation and local engagement in development, to help create sustainable community environments.

The original prefabricated structural frame of the three-tower residential development offered poor insulation, while thin internal partitions brought limited soundproofing. Over time, the external appearance deteriorated, the blocks were considered beyond redemption and earmarked for demolition.

The practice conducted community workshops and interviewed residents. It drew on precedents of best practice in community housing from the UK and northern Europe, and prepared a detailed report with ambitious Passivhaus targets for a future retrofit. It submitted a competitive proposal to complete the retrofit via project manager Faithful + Gould.

Following planning approval, it was agreed that the three towers had to remain in occupation during the entire retrofit, which demanded detailed program scheduling and careful site management.

One element of the refit is the previously open balconies, “utilized only by pigeons” according to project architect Rupert Daly, have been glazed, transforming the spaces into winter gardens, which are now the primary feature of the new elevations. The concrete balconies that served as thermal bridges, bringing the cold inside, are now insulated and clearly well-used by the residents.

The duplex apartment sections are expressed in color on the slender sides, using a palette of greys which cloak the new elevations to “blend with the sky.” Day-Glo yellow powder-coated aluminum flashing and soffits were chosen to define the winter gardens and wrap around all sides.

The entrances at the base of each tower have been transformed, providing a dual access lobby with internal garden areas and community notice boards. New lifts have been added, as well as well-lit community meeting rooms, children’s play areas and art-studio facilities.

The towers are grounded by white precast concrete, with white brickwork walls and an entrance colonnade, providing additional security while marrying tower and base.

Landscape architects are presently working on improvements to the public realm and, once these works are complete, the whole amenity offering of the area will be improved.

“The refitting of these buildings stands as an example of what can be achieved in community engagement and the intelligent application of sound design and good architecture in the urban realm.”

“Before the refurbishment could be considered, it was necessary to assess the buildings and determine that the structure would perform satisfactorily for the next 30 years or more.”

Retaining and retrofitting an existing building is more sustainable and generally preferable to rebuilding. However, before the refurbishment could be considered, it was necessary to assess the buildings and determine that the structure would perform satisfactorily for the next 30 years or more.

Engineering consultant Cundall assessed the building using archive information, as well as visual and intrusive investigations, to determine chloride and sulphate levels, depth of carbonation, concrete quality and strength, and the extent of cracking and micro-cracking.

Cedar Court’s Bison concrete cross-wall construction was shown to be in good condition. However, some signs of structural deterioration, such as cracking and spalling, were observed, particularly on exposed elements. None of these were deemed to be beyond repair and, overall, the towers were in good structural condition, given their age.

Assessments demonstrated that the proposed refurbishment was structurally feasible, and allowed the design team to progress the highly energy-efficient solutions that have been adopted. When complete, Cedar Court will be a significant improvement over current building regulations and help mitigate fuel poverty for over 300 homes.

According to Neil Dely, civil and structural engineering partner at Cundall, the heat loss form factor (ratio of external envelope to floor area) of the flats is very efficient. “We managed to optimize this further by enclosing recessed balconies, which had the dual benefit of resolving a significant proportion of the building’s cold bridges and reducing the overall thickness of insulation required.

“At one point we suggested removing the projecting amenity balconies to further minimize thermal bridging. Residential consultation, however, deemed these to be an important amenity, and as a result these were retained with the slab element insulated.”

Air permeability testing found the existing building to be comparable with current regulation requirements and simplified the approach to air-tightness, using the existing precast concrete cladding panels as the airtight layer, and ensuring the joints between panels and new windows were sealed to the concrete. Interim testing helped to validate this approach.

The existing windows, while double-glazed, had poor installation and frame efficiency by current standards. New triple-glazed windows were specified and moved out to meet the insulation plane, significantly reducing heat loss at this repetitive junction.