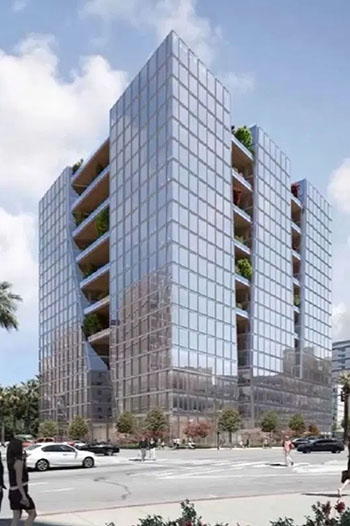 Calling it a watershed moment for the capital of Silicon Valley, city officials broke ground on what could eventually become San Jose’s tallest building.

At 300 feet (91 meters) and 19 stories, 200 Park will be finished sometime in 2023, according to Jay Paul Company, the developer behind what is expected to become an iconic high-rise at the corner of Park Avenue and South Almaden Boulevard. It’ll be downtown’s first office tower to be built on a speculative basis in nearly a decade.

“The rents were much, much higher to the north of us, and the construction costs are the same wherever you build in the Bay Area and so, builders tended to go where they could get higher rents,” said San Jose Mayor Sam Liccardo.

Supporters say “building up” gives the city a better chance of landing larger-scale projects such as 200 Park in the future.

“You can go up, instead of pushing down and out.”

“If you’re allowed to go taller, you can do some different things with your architecture: obviously, you can have a denser building, you can go up, instead of pushing down and out,” said San Jose Downtown Business Association Executive Director Scott Knies. “It just changes the dynamics of what’s going on in this area.”

The striking tower, designed by Gensler, is expected to total 875,000 square feet (81,290 square meters), with room for more than 4,000 employees. Multiple terraces and bridges will provide natural lighting on every floor.

“A lot of young people want to have the excitement of a city, with the housing, and the business, and all the entertainment and the restaurants right by where they work,” said veteran developer Jay Paul. “That’s the component that’s going to make San Jose a really great success.”

Many say the project is a calculated risk that could forever change the city’s downtown core in a positive way.

For more on this story go to ABC News 7.