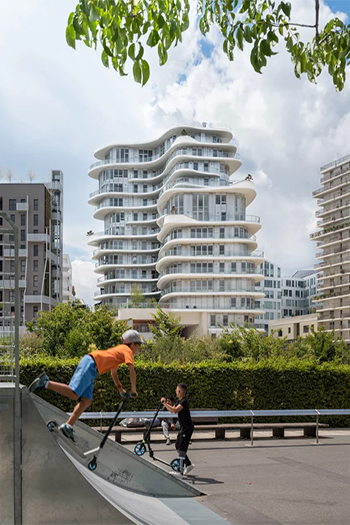 UNIC has been developed in collaboration with local residents, architects, and developers.
26 July 2019 | Paris, France

After winning an international design competition in 2012, the scheme was developed in collaboration with local French firm Biecher Architects, and is expected to be complete in September 2019. Characterized by a winding, undulating form, the building forms part of a mixed-use masterplan in the rapidly-growing Clichy-Batignolles district.

UNIC is situated in the Parisian Haussmann apartment block, but, unlike the formal architecture of the neighborhoods surrounding buildings, MAD‘s design takes on an organic shape in a bid to weave an element of nature into the urban fabric. To form a connection with the adjacent park, the complex is designed with a series of rounded terraces, extending green spaces into homes and giving the building a dynamic aesthetic. The terraces also open the interior spaces up to the outdoors, bringing in natural light and providing residents with impressive views over the city skyline and the iconic Eiffel Tower.

“The site aims to breathe new life into the area.”

Situated in the north-west of Paris, the masterplan in Clichy-Batignolles is designed to establish a new part of the city. Working with the community through workshops, UNIC has been developed alongside local residents, architects, and developers and will provide both private and affordable housing. In addition, by providing not only residential buildings but also community-based resources, the site aims to breathe new life into the area.

In addition to providing apartments, the 50-meter tall structure is also planned to include a kindergarten, retail spaces, and other community resources on the ground floor. Residents will also be well-connected to the rest of the city by the integration of a metro station. By working with residents and focusing on bringing green areas into the building, UNIC is hoping to create optimum living spaces by constructing a building that blurs the line between architecture and nature.

For more on this story, go to Designboom.