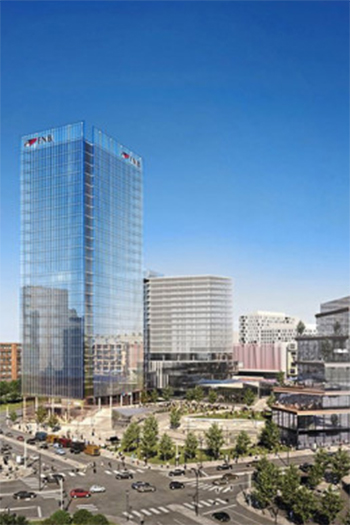 A 26-story financial tower is being planned on the former site of an arena in Pittsburgh. Credit: Gensler
14 October 2020 | Pittsburgh, United States

The Penguins say they have the last piece of financing needed to redevelop the former site of the Civic Arena.

Clay Cove is investing in the 26-story First National Bank tower planned to be built on the site. The tower is the first big project planned for the former site of the arena and will hopefully be a bridge that connects the Hill District to downtown.

There are also plans for a hotel, retail space, homes, and a concert venue.

It hasn’t been easy, but it’s come together with a new business partner for the Pittsburgh Penguins: Wilmington-based Buccini/Pollin Group.

“We would like to take large complicated projects and create the mixed-use nature of it. So putting office and parking and entertainment,” said developer Chris Buccini.

A groundbreaking is expected in the spring of 2021.

For more on this story, go to Pittsburgh Local.