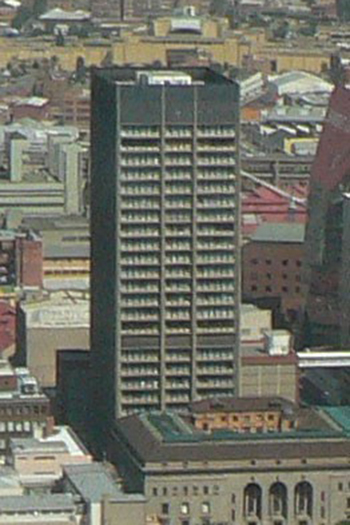 An office tower in South Africa’s largest city imploded in a controlled demolition on 24 November 2019.

The former Bank of Lisbon Building at 37 Sauer Street in Johannesburg rose 26 stories, with a total height of 377 feet (115 meters). It originally opened in 1967.

"Probably one of the most difficult demolitions," they have worked on, said Tasneem Motara, Gauteng Member of the Executive Council for Infrastructure and Property Development.

"It was completely successful," she added.

The decision to demolish the tower was taken by the Gauteng provincial government after a structural assessment following a major fire in September 2018 that took the lives of three firefighters.

Motara added that a new building constructed in place of the tower will house a provincial government department.

At least R140 million (US$9.5 million) was budgeted for the complete demolition project, with R90 million (US$6.1 million) of that used for the implosion. The final costs will be determined when clean-up operations are completed.

For more on this story, go Eyewitness News.