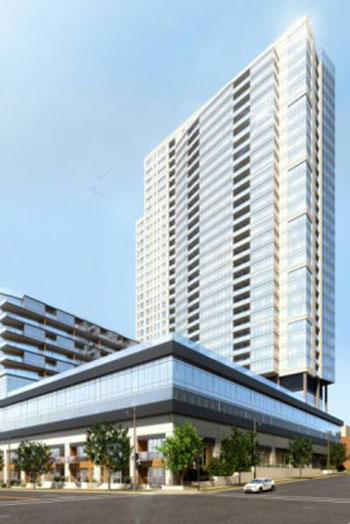 The tower would have as many as 350 affordable and market-rate residential units, office space, 13 townhouses, and amenities typically found in upscale high-rises.
11 November 2019 Milwaukee, United States

The Housing Authority of the City of Milwaukee (HACM), through its development arm Travaux Inc., plans to construct a 32-story mixed-income tower to fill a niche it claims is not being met in the Milwaukee area.

This spring, officials unveiled the housing authority’s plans for Convent Hill South, which would go up at the corner of Knapp and Milwaukee streets. The roughly US$150 million tower would have as many as 350 affordable and market-rate residential units, 40,000 square feet (3,716 square meters) of office space, 13 townhouses and amenities typically found in upscale high-rises, such as a swimming pool and fitness center.

Scott Simon, vice president of development with Travaux, said Convent Hill South is a unique project for the area. However, it would not be different from high-rises built elsewhere in the US, in communities that contain inclusionary zoning requirements. Such requirements ensure a portion of units are set aside for low-income families.

“We are filling a niche that a lot of other communities are having filled with mixed-income development.”

“By definition we are filling a niche that a lot of other communities are having filled with mixed-income developments on all sides,” he said.

Milwaukee is not able to enact such requirements due to state law, said Simon. Elected leaders in 2017 considered an inclusionary housing proposal for certain properties that receive assistance from the city, but the city attorney’s office said such a move would be illegal.

Amy Hall, a HACM spokeswoman, added that the revenue generated from the market-rate and commercial tenants will help finance necessary capital improvements on Housing Authority properties. Financing those improvements has become more difficult in recent years, due to shrinking contributions from the federal level, she said.

“What this allows us to do is provide a funding stream that allows us to maintain our portfolio and generate the money that goes back into HACM,” Hall said.

In addition, according to Simon, there is a shortage of affordable units across the nation. In Milwaukee specifically, the shortage is made apparent by the waiting lists for various HACM properties. “We’re hoping to provide as many new units over the next number of years that we can to accommodate the demand,” he said.

As for market rate, Simon said it appears vacancy rates are falling below 5 percent in the market, adding that according to market research, 5 percent appears to be the equilibrium in the market. “That tells us there is greater demand than there is supply at the moment.”

As of mid-October, schematic design on the project was at 90 percent completion, he said. The project team had also completed outside market research, and was still determining the appropriate unit mix. Further, the team will also have to determine what percent of the area’s median income renters would need to be earning in order to qualify for the affordable units.

Simon said he expects the unit mix and affordability levels will be finalized within the next six months.

Also to be finalized are development design and construction documents. Simon said each of these steps will take at least three months, and that’s after an additional month needed to complete schematic design. From there, Travaux will piece together the project financing.

“There’s many options we’re looking at right now, the first and primary being the Opportunity Zone funds that are available,” said Simon, alluding to the fact that the site falls within a federal and state designated Opportunity Zone. This program was created in 2017 by federal lawmakers to encourage investment in projects located in distressed areas.

Simon said he expects Opportunity Zone funds to make up somewhere between 15 and 20 percent of an equity contribution on the project.

Other financing options include various HUD programs, offerings from Fannie Mae and Freddie Mac, and more conventional options, such as mezzanine and equity debt.

Travaux was incorporated in 2015 as a nonprofit entity that’s independent of the housing authority. However, it is an “instrumentality” of HACM, Simon said.

“Which means we follow the same rules and guidelines as the housing authority, but we act independently,” he said. “As a non-for-profit, anything that we earn is pushed back into the housing authority for the general missions (of) providing additional housing, additional amenities for the residents of Milwaukee that are in need.”

Unnamed Milwaukee-area developers said they were surprised and perplexed when they first learned of the project, questioning why the housing authority would create an entity that essentially competes with the real estate community, rather than seek out partnerships with private developers.

One developer questioned the reasoning for a residential tower. He said a high-rise is far more expensive than several mid-rises, which would effectively provide more units at a lower cost. He argued that the Milwaukee market is only able to take on a certain number of residential towers. What’s more, there are a number of towers proposed for downtown by private developers already. It may have made sense if all the units in Convent Hill South were affordable, so as not to take away from the market for these other projects, the developer said.

As to why HACM chose to go with Travaux on this project and not a private partner, Hall noted the housing authority has 15 years of development experience on its own. She also pointed out the fact that any revenue Travaux takes in directly benefits HACM. Private developers, on the other hand, keep those development fees.

Simon, meanwhile, explained the reasons for building a high-rise rather than something at a smaller scale.

“We don’t have control over what is going on in the private sector,” he said. “That’s fully market-driven, as we believe our market-rate products will be as well.”

Some developers are looking for state and local assistance for their projects, which Travaux likely won’t need to do because the parcel is in an Opportunity Zone, Simon said.

And the limited availability of real estate on the Lower East Side necessitates Travaux build up, he said. If Travaux did not build a high-rise it would actually limit the number of units that it could offer on that particular site.

“If the demand were being filled for the affordable units in the private sector, there would not be demand for us to bring a mixed-income building in the marketplace, but there is a demand for it.”

“If the demand were being filled for the affordable units in the private sector, there would not be demand for us to bring a mixed-income building in the marketplace, but there is a demand for it,” Simon said, addressing concerns of this project impacting other planned towers.

One question by developers still remains unanswered, however. That is whether the tower, if eventually constructed, will be subject to property taxes.

“That will depend on the financing for the project, so that is unknown at this time,” Hall said.

For more on this story go to BizTimes.