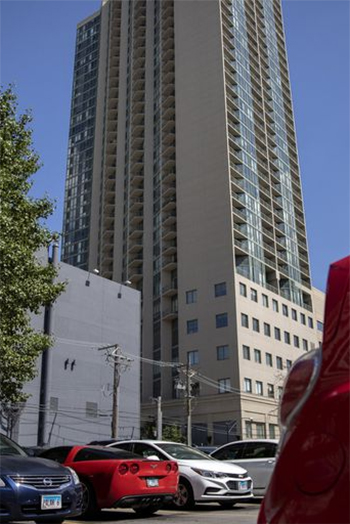 One of Chicago’s busiest luxury residential developers wants to build a 43-story apartment high-rise using air rights from a Near North Side church, but nearby condo owners are going on the offensive to stop it.

Fifield Cos. wants to construct the 406-unit building on a parking lot at Maple Street and LaSalle Drive, along the west side of the Gold Coast Galleria condominium tower at 111 W. Maple St., according to the condo association.

Residents believe the proposed 457-foot-tall (139-meter-tall) tower is too ambitious for the size of the site, saying it would block sunlight and air flow, snarl traffic and reduce property values, said Wolfgang Suess, treasurer of the condo board and a spokesman for residents in the 34-story Galleria.

Other Referenced Buildings
727 West Madison
NEXT
The Sinclair

The towers would be separated by an alley both buildings would use to access their parking garages.

“We’re shocked that it’s 20 feet (6 meters) away, which is obnoxiously close,” Suess said. “They would be making money at the expense of well over 100 units that would have to look directly into their building.

“We have every intention to fight this every step of the process to be sure it does not receive the multiple approvals it would need from City Hall. We will fight this.”

There are no zoning rules designed to preserve views, but opposition from neighborhood groups and the local alderman can make zoning difficult to achieve, if not impossible, under Chicago’s zoning system.

Just a few blocks away, 2nd Ward Ald. Brian Hopkins last year shot down another developer’s plans for a 39-story residential tower on the site of a Barnes & Noble store following an outcry from Near North Side neighbors.

Fifield has not conducted any community meetings to gauge support, but the Galleria’s board already has expressed its opposition to Hopkins, according to Suess.

The developer presented its plans to the condo board about a month ago during an online meeting, Suess said.

The proposal includes buying air rights from the Annunciation Greek Orthodox Cathedral that could be contributed toward zoning for a high-rise on the site, Suess said. The site is just north of the cathedral, and now includes a parking lot and a small residential building that would be acquired by Fifield and razed, Suess said.

Fifield’s proposal includes plans to add a 12-story community center and parking structure for the church that would be between the cathedral and the apartment building, he said.

“We have held preliminary ‘virtual’ discussions with a number of residents and area organizations to solicit input, including representatives from 111 W Maple Street,” Adam Gypalo, a spokesman for the developer, said in an emailed statement. “We look forward to working with the alderman on scheduling a community meeting to further discuss the proposal with the community.”

Hopkins said information about the community review process is coming within the next two weeks.

“Generally I’m not sympathetic to opposition based on views,” Hopkins said. “There are other legitimate objections, and I don’t think this will end up being an argument about views.”

The lack of a setback from the street, using a small alley as an access point and the traffic impact on LaSalle will be key issues, Hopkins said.

Gold Coast Galleria condo owners on Thursday morning received letters from the condo board outlining Fifield’s plans and describing the association’s plans to fight the development.

“The Board understands that development in Chicago is a fact of life,” the letter reads. “But development should enhance a neighborhood, not harm it. There are more appropriate locations in the area for a development of this size and scale than the footprint at 125 W. Maple.”

Fifield’s tower would include 146 parking spaces and 3,700 square feet (343 square meters) of ground-floor retail, according to the letter. Because it would be taller than the Gold Coast Galleria, the proposed tower would cast shadows, block views and diminish property values, the board said.

“For a lot of families, this is their nest egg and they’re going to lose tens of thousands of dollars in value,” Suess said. “We want to protect our investment and our quality of life.”

The Chicago-based developer, led by founder and CEO Steve Fifield, is a prolific developer of residential buildings in Chicago and other US cities, including Los Angeles and Dallas.

Projects in recent years have included two within a few blocks of the Maple Street proposal: the 390-unit Sinclair apartment high-rise in the Old Town neighborhood and the 310-unit Next Apartments on the Near North Side. Other recent Chicago projects include the 492-unit 727 West Madison tower along the Kennedy Expressway and the 220-unit Logan Apartments in the Logan Square neighborhood.

This story has been updated. An earlier version said the Sinclair was in the Old Town Triangle neighborhood.