Robert Bruegmann is an historian and critic of the built environment. He received his PhD in art history from the University of Pennsylvania in 1976 and since 1979 has been at the University of Illinois at Chicago where he is currently Distinguished Professor Emeritus of Art History, Architecture and Urban Planning. He has also taught at the Philadelphia College of Art, MIT and Columbia University. Among his books are The Architects and the City: Holabird & Roche of Chicago 1880-1918, published in 1998; Sprawl: A Compact History, published in 2005; The Architecture of Harry Weese, published in 2010, and he was the editor of Art Deco Chicago: Designing Modern America published by the Chicago Art Deco Society and distributed by Yale University Press in 2018. His main areas of research are in the history of architecture, urban planning, landscape and historic preservation. 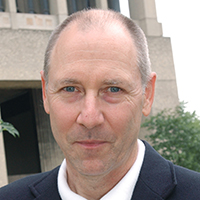