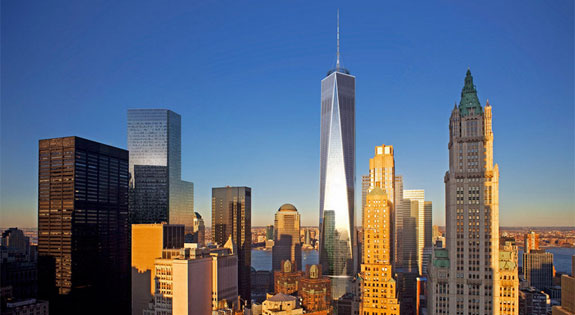 The Council on Tall Building's announced Tuesday, November 12, that it ratifies the One World Trade Center's 1,776-foot height.

Changes to the design of the top of One World Trade Center raised questions about the ultimate height of the tower and generated a wave of international media coverage. The Durst Organization chose not to include the cladding for the structure on top of the tower, which may change the calculation of the building’s ultimate height to architectural top.

The Council has since been the center of a media firestorm surrounding its ultimate decision, which was made on November 8, 2013, by the CTBUH Height Committee, assisted by a number of other CTBUH Leaders.

Here is a sample of the national coverage:

12 November, The New York Times
By a Spire, Manhattan Regains a Title from Chicago

12 November, ArchDaily
CTBUH Crowns One World Trade as Tallest Building in US

12 November, BD
SOM's One World Trade Center Confirmed as Tallest in the US

New York, Chicago Claim 5 of the Tallest US Buildings

08 November, NPR
Size Does Matter, At Least in the Tallest Building Debate

08 November, CBS
Battle of the High-rises: Which Tower is America's Tallest?

31 October, The Globe and Mail
One World Trade Center Has Its Coming Out Party