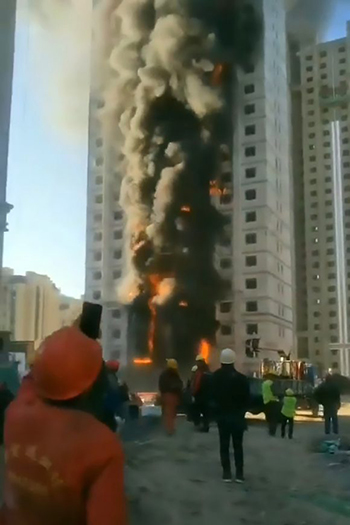 The fire spread and damaged about 14,000 square feet (1,300 square meters) of the structure before the fire service brought the flames under control.
06 November 2019 Urumqi, China

Footage has been released of an uncompleted luxury high-rise development in Ürümqi engulfed in flames, showing fire traveling up its side. The building, which is in the capital of China’s Xinjiang Uyghur Autonomous Region, had yet to be completed and was not occupied at the time.

Images taken by witnesses and construction workers show Block 8 of the Yunding Daguan Residential District development ablaze on the morning of 30 October 2019.

Workmen evacuated the structure when the fire began near the ground floor and quickly spread up the 29-story residential high-rise.

Videos show construction workers watching helplessly as the building becomes engulfed in flames, with thick, black smoke rising along the side of the building as cladding burns.

According to reports, the fire started when insulation material in the exterior walls was ignited.

It spread and damaged about 14,000 square feet (1,300 square meters) of the structure before the fire service brought the flames under control several hours later.

No casualties have yet been reported, but investigations into the precise cause of the blaze are still ongoing.

For more on this story, go to ViralTab.