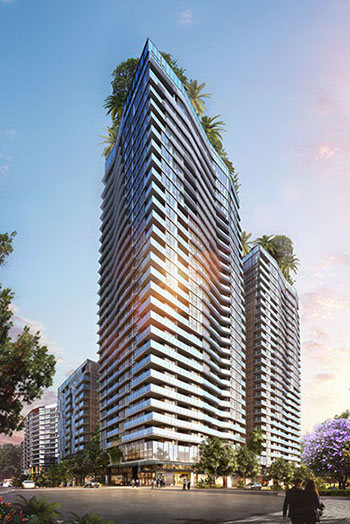 At 33 stories the development boasts the tallest building south of the river in Brisbane.
12 September 2019 Brisbane, Australia

The residential development transforms the site of a former TAFE college, located one kilometer from Brisbane’s CBD.

The project also forms part of the group’s plans for several other prime south-east Queensland projects, including a massive development located in Brisbane inner suburb West End planned to open in 2023.

R&F Property had its AU$500 million (US$344 million) West End apartment project re-drawn and submitted to council during the Christmas period 2018. It will consist of seven towers on the 1.6 hectare Donkin and Hoskings streets site, secured in 2015 for $82.5 million (US$56.7 million).

Moving further afield from Brisbane CBD, R&F property will deliver up to 10,000 apartments spread across 31.5 hectares as part of its Central Gardens residential community development in Greater Springfield.

Last month, the developer topped out on the first building of a AU$750 million ($US515 million), eight-building residential and mixed-use development in Melbourne’s Footscray. Dubbed “Live City,” the development is being built on the Kinnears Ropeworks factory site at 124-128 Ballarat Road, a site R&F secured in 2016 for AU$60 million (US$41.2 million).

“We specialize in the urban renewal of under-utilized land by reimagining spaces to create projects that meet with the changing needs of fast-growing cities such as Brisbane,” he said.

Chiu says more than 80 percent of the 608 apartments have been sold with the first residents now starting to move in.