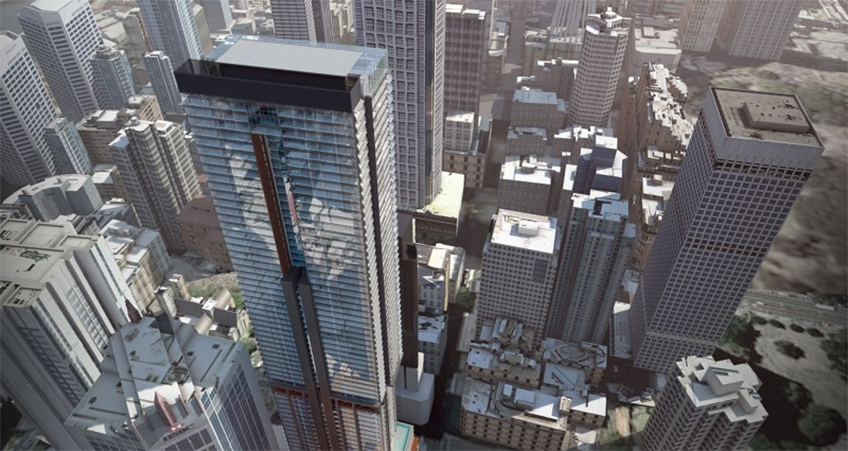 Greenland Australia is one step closer to unveiling its latest contribution to the evolving Sydney skyline, following a "topping out" ceremony at the company’s landmark project, Greenland Centre Sydney, on Thursday 3 September 2020.

Located on the site of the former Sydney Water headquarters at 115 Bathurst Street, just moments from Town Hall Station, Greenland Centre Sydney has now marked the completion of its uppermost floor, which rises 68 stories (245 meters) above the Sydney streetscape, making it one of the tallest towers in the city.

To celebrate the milestone, Greenland Australia’s Managing Director, Sherwood Luo, was joined by The Right Honourable Lord Mayor of Sydney, Clover Moore, NSW Managing Director of project builders Probuild, Nick Gaudry, and Co-CEO of project architects BVN, James Grose, along with a selection of other project stakeholders, at a COVID-19-compliant ceremony.

In a sign of the times, attendance at the event was limited to only 15 guests, who remained socially distant throughout, while other guests watched on via an exclusive live stream.

The event was held on the top floor of Greenland Centre Sydney – the location of the project’s AUD$35 million (US$25 million) King Penthouse – which boasts 270-degree vistas over the iconic Sydney Harbour and CBD, as well as across Barangaroo and Darling Harbour to the Blue Mountains.

In keeping with tradition, the event included the raising of a ceremonial evergreen tree to the top of the building as a symbol of good luck.

Once complete, Greenland Centre Sydney will comprise a total of 479 apartments, varying in size from 39 to 265 square meters and including the 674-square-meter David Selden-designed King Penthouse.

“We couldn’t be more excited to reach this milestone and we look forward to welcoming our future residents to Greenland Centre Sydney as soon as possible, where they will enjoy a prime position in the heart of the CBD.”

Two thousand square meters across the first five floors of Greenland Centre Sydney will house the City of Sydney Creative Hub, a destination for the city's growing arts community. Indeed, with soundproofed rooms for music rehearsals, editing suites for filmmakers and studios for visual artists, the AUD$25 million (US$18 million) Creative Hub is expected to be a go-to destination for Sydney’s budding and established creatives.

Meanwhile, resident-focused amenities at Greenland Centre Sydney will include a 30-meter indoor-outdoor pool, a steam room, sauna and spa, a multi-function residents' room and an outdoor sundeck.

Now that the tower has achieved topping out status, Probuild will focus on the final phase of construction, including final façade installations and the completion of internal fit-out, prior to Greenland Centre Sydney’s scheduled opening in early 2021.

For more on this story, go to greenlandaustralia