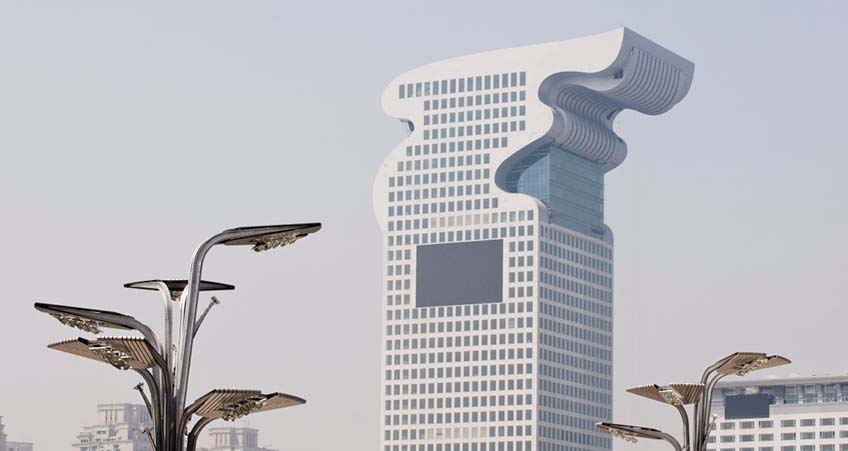 With its exaggerated crown and bulging upper levels, the 39-floor Pangu Plaza casts an unusual shadow over Beijing.

And now the dragon-inspired skyscraper has an equally odd ownership story: It sold online August 20 for a bargain $734 million after being confiscated from a fugitive billionaire.

Located less than half a mile from the iconic Bird’s Nest stadium, the 629-foot (191.7-meter) tower was completed in 2008 in a district built for that year’s Beijing Olympics.

A Beijing court put the building up for auction on a website run by e-commerce giant Alibaba.

But in 2016, authorities seized ownership of the skyscraper from real estate company, Beijing Zenith Holdings, controlled by exiled Chinese billionaire Guo Wengui. A Beijing court then put the building up for auction on a website run by e-commerce giant Alibaba.

Guo, who claims to be a corruption whistle-blower and has lived in the US since 2014, is wanted by Chinese authorities on a series of charges, including fraud and bribery. Many of his assets in China have been frozen or repossessed by the government.

According to the online listing, only two bidders signed up to participate in the auction, though more than 150,000 people registered to watch the sale online. Bidding was open for 24 hours, with only two offers for the building made in that time.

The buyer has been identified as Beijing property firm Yucheng Zhiye, according to a statement released by its parent company, BBMG Corporation. And the group may have secured something of a bargain: The auction listing claims the tower is worth over 7.4 billion yuan ($1.05 billion)—more than 40 percent above the selling price.

Guo claims that the property is worth even more. In a video uploaded to YouTube on August 21, he said the winning bid was only 10 percent of its estimated value.

With a combined floor space of more than 1.5 million square feet (139,000 square meters), the skyscraper currently serves as the China headquarters for American technology firm IBM. It was designed to resemble a dragon’s head, with a further four towers representing the creature’s body and tail.

Pangu Plaza’s other buildings—which contain offices and a self-described “7-Star Hotel”—were not included in the auction.

For more on this story go to CNN Style.