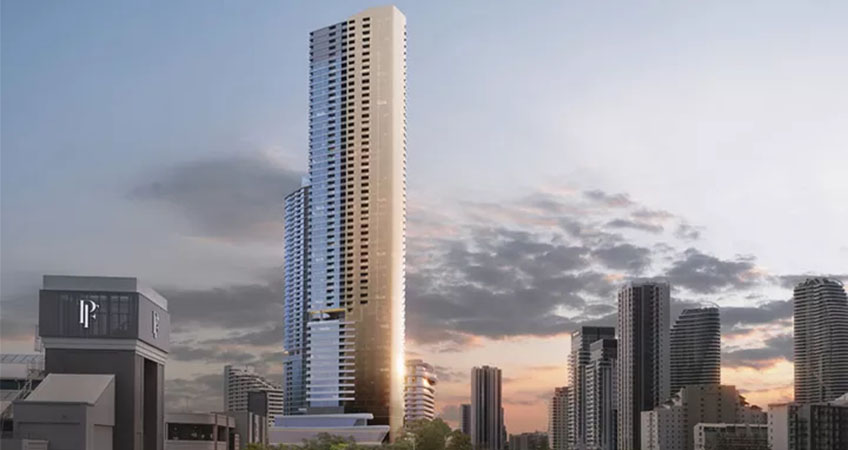 Star Entertainment Group has fast-tracked residential sales in Broadbeach, bringing forward construction of the second mixed-use tower at its Broadbeach Island master plan. The AU$500 million (US$349 million) skyscraper will deliver 457 apartments over 63 stories to market, with construction expected to commence in mid-2020.

The fast-tracked release will add to growing confidence in the Gold Coast high-rise residential market, which experienced an uptick in sales over the March quarter.

The Star Queensland managing director Geoff Hogg said the consortium has expedited sales due to demand for real estate on Broadbeach Island. The first residential tower, which kicked off construction last year, has clocked 92 percent in sales to date.

The first residential tower, which kicked off construction last year, has clocked 92 percent in sales to date.

“The sales success of the first tower, and it being under construction, gives a lot of people confidence about our master plan and what we’re doing,” said Hogg, adding, “Obviously the market has changed a lot, but until you start selling you’re never quite sure how the market has shifted and where it will come from…off the back of tower one we’re confident there’s market demand there and we will know a little more about those trends in the near future.”

The AU$400 million (US$279 million), 53-story first tower will deliver a 316-key Dorsett Hotel—the first of its kind in Australia—and 423 residential apartments.

Hogg’s confidence in the Gold Coast extends to the investor market, which he said was still strong. “Because the pre-sales for one-bedroom apartments went so well, we feel like there may be 50 percent —or even slightly higher—of sales to investors,” Hogg said. “Obviously it’s hard for us to gauge until we find out who wants to participate in the letting pool.”

The Star-led Gold Coast Consortium is a joint venture with Far East Consortium and the Hong Kong-based Chow Tai Fook Enterprises. Each partner has a third equity share in both mixed-use towers.

The state government-approved Broadbeach Island master plan has seven towers in total, with two existing hotels: the 600-room The Darling, which was opened ahead of the Commonwealth Games, and the recently refurbished Star Grand; and five new towers yet to be completed.

An operator for the 210-key hotel in the second tower will be named in the coming weeks, which Hogg says will be a new hotel brand not available on the Gold Coast. “It will be a very exciting addition, and the fourth hotel available on the island.”

The Star/Far East Consortium/Chow Tai Fook joint venture has more than AU$6 billion (US$4.2 billion) in development under way, including Brisbane’s Queen’s Wharf and West Side Place in Melbourne. The group is still working through an approval process for an AU$500 million (US$349 million) Ritz-Carlton hotel in the Pyrmont-Darling Harbour precinct.

For more on this story go to  The Urban Developer. The Dorsett and Star Residences