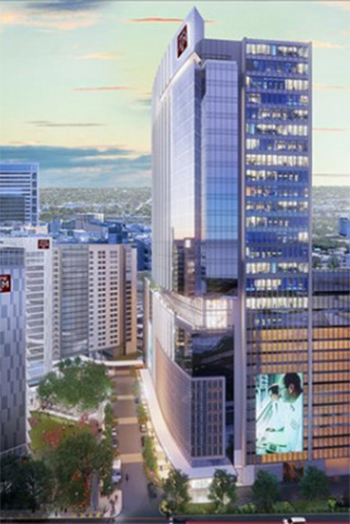 The campus will also feature a scenic plaza as well as retail and dining.
29 July 2020, Houston, United States

JLL has been hired to handle leasing for another prominent tower in the Texas Medical Center area.

Houston-based Medistar Corp. and Texas A&M University will start building the tower later in 2020, and it's scheduled to deliver in January 2024, according to a press release from JLL and past announcements. Dubbed Horizon Tower, the project will be built atop a 13-story parking structure at 6929 Main St.

Horizon Tower is part of the US$550 million Texas A&M Innovation Plaza near the corner of Main Street and Holcombe Boulevard in the Texas Medical Center. Texas A&M announced the 5-acre (2-hectare) campus in February 2019 and revealed its name in May. The buildings' names were announced in June. In addition to Horizon Tower, the campus includes Discovery Tower and Life Tower.

Discovery Tower is the 17-story office building at 1020 Holcombe Blvd. that Texas A&M acquired in 2017 for US$145 million. That building was purchased to house the two-degree EnMed program, which provides students the chance to earn a master’s degree in engineering from Texas A&M University and a medical degree from the Texas A&M College of Medicine. Following renovations, Discovery Tower is slated to open later this year.

Life Tower is scheduled to be complete in June 2022. Texas A&M medical students and Prairie View A&M University nursing students will be given priority in the 19-story, 714-bed student housing tower, but other students could fill any remaining units.

Medistar is developing the public-private partnership projects, which will total US$401 million in private investment. Infrastructure investment firm American Triple I Partners, founded by Texas A&M alum Henry Cisneros, is part of the financing team.

Separately, JLL recently was hired to handle leasing for the iconic twin-spire tower in the TMC earlier this month. The building, formerly called the O’Quinn Medical Tower, is at 6624 Fannin. Texas Children's Hospital acquired the building, along with the nearby Baylor Clinic Building, in 2016 from Baylor St. Luke’s Medical Center, a joint venture between Baylor College of Medicine and CHI St. Luke’s Health.

For more on this story, go to Biz Journals.