Quito’s New EPIQ Tower to Follow Up IQON and Qorner 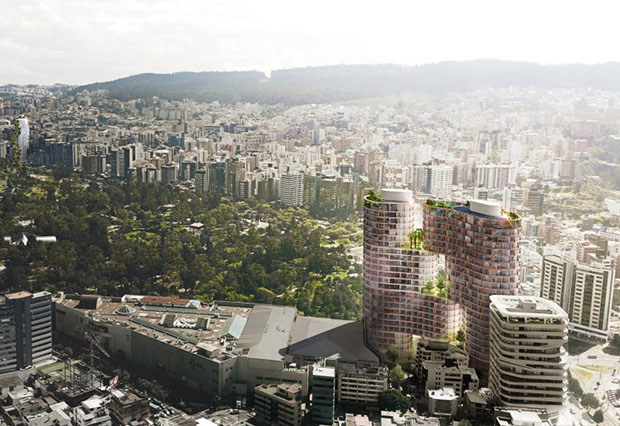 BIG’s mixed-used EPIQ tower was developed in collaboration with Quito’s Uribe & Schwarzkopf. It marks BIG’s second project in the city after the IQON tower, which was revealed last year and is currently under construction.

Described as a “vertical city,” the 24-story EPIQ will provide residential, commercial, and office space on a plot in the city’s Parque La Carolina neighborhood. Its design draws on details found in nearby area Old City – a UNESCO World Heritage Site. “The historical center of Quito with its red herringbone sidewalks is a bombardment of forms, geometry, typography and color,” said BIG founder Bjarke Ingels.

Slated for completion in 2022, EPIQ will rise on the southwest corner of La Carolina Park, near to a major metro station in the city’s soon-to-open first underground line. It forms part of a swell of new projects recently announced for the city, including BIG’s IQON skyscraper, which is set to become the city’s tallest building when completed in 2021. Moshe Safdie’s firm has also designed a tall building with lush terraces for the city called Qorner.

EPIQ comprises two interlocking structures covered in pinkish tiles, as a reference to the hues of the Old City’s salmon pink buildings that date back to the 16th century. Tiles in varying tones will cover different portions of the fragmented building.

“As architects, we are often a little afraid to play with color – in Quito we thought it could be interesting to use color to accentuate the different building blocks and give each volume its own shade of red,” said Ingels.

Large green pockets will break up the form of the tower, as a reference to the 65.5-acre (26.5-hectare) landscaped park it faces, and provide residents with access to outdoor space. “At the south tip of La Carolina Park, our aim is to create a three-dimensional community: a constellation of building volumes of different sizes that form a holistic whole, offering the residents and their families a variety of sun-filled openings, passages, parks and pockets for play, social life, work, and enjoyment,” Ingels added.

Angular windows cover much of the curved exterior to provide natural light and vistas from almost every part of the building. Residences are planned with an open layout and private balconies, as well as access to larger, communal outdoor spaces scattered across the tower. Amenities include an outdoor swimming pool, a cinema, squash court, bowling alley, a business room, party areas, a music room, spa, gym, and children’s play area.

BIG and Uribe & Schwarzkopf also intend for EPIQ to include a host of sustainable design features. A greywater treatment plant that will reuse rainwater and a materials bank to reuse and recycle construction materials are among the current proposals.

“Quito has grown and changed enormously since we founded Uribe & Schwarzkopf in the 1970s, and it became clear in recent years that we needed to experiment with residential architecture to respond to the new character of the city – which retains the respect for nature and community integral to life here, but embraces a new urbanism,” said Uribe & Schwarzkopf founder Tommy Schwarzkopf.

Ecuador, in general, is undergoing a transformation as new projects crop up across the country. Many of these are residential and include a flat-roofed concrete residence by Gabriel Rivera Arquitectos, a rural retreat with rammed-earth walls by Rama Estudio, and a house with a jagged brick roof by Felipe Assadi Arquitectos, and a bow-tie-shaped abode near the coast by Emilio López.

For more on this story go to Dezeen.