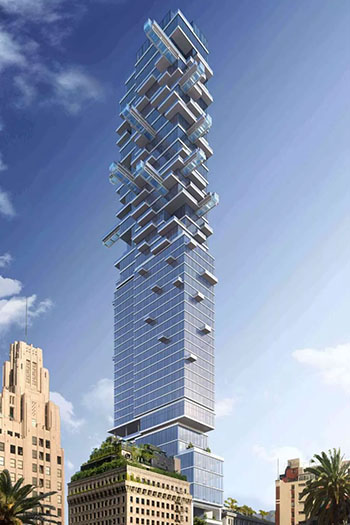 Plans for what could become one of Downtown’s most unique-looking skyscrapers received unanimous approval today from the Los Angeles city planning commission.

With cantilevered swimming pools jutting out of its upper floors, the proposed Fifth & Hill tower, across the street from Pershing Square, has been said to look like an in-progress game of Jenga. Commissioner Samantha Millman called it an “ambitious and audacious project.”

The 53-story hotel and condo tower would rise on a slim, L-shaped lot that wraps around the Pershing Square building, also owned by the tower’s developer, Jeffrey Fish of JMF Enterprises.

“The glassy high-rise would incorporate a number of water features, including two that will effectively hide the above-ground parking podium behind a wall of falling water.”

In addition to the seemingly precarious pools, the glassy high-rise would incorporate a number of other water features, including two that will effectively hide the above-ground parking podium behind a wall of falling water.

Inside the structure, there would be 190 “five-star” hotel rooms and 31 condominiums. Twelve residences would have their own cantilevered glass swimming pools. The tower would also have a connection on its 13th floor to the popular rooftop restaurant Perch, located in the Pershing Square building.

The structure was envisioned by Fish and designed with Miami-based Arquitectonica, which was also the architect for the Emerson apartments next to the Walt Disney Concert Hall on Bunker Hill.

The commissioners applauded the project’s bold architecture and creative approach to disguising parking. But commissioner David Ambroz said he worried that, if the project were approved and then sold, the design might lose its most exciting aspects and become “a shorter rectangle.” In an attempt to make it hard for a developer to change the approved design down the road, the commission requested that the project go before the commission again if a new design was desired.

“Visually, this is an incredible project, but there are so many other benefits,” said commissioner Marc Mitchell.

The commission also struck down an appeal of the project brought by Supporters Alliance for Environmental Responsibility, which charged that the project’s environmental impacts had not been sufficiently analyzed and that mitigation measures for its impacts on traffic and noise were lacking.

At today’s meeting, a representative of the alliance told the commission that the group had worked out “additional mitigations” with the developer and was now supporting the project.

The commissioners voted unanimously to approve the project and deny the appeal.

For more on this story go to Curbed LA.