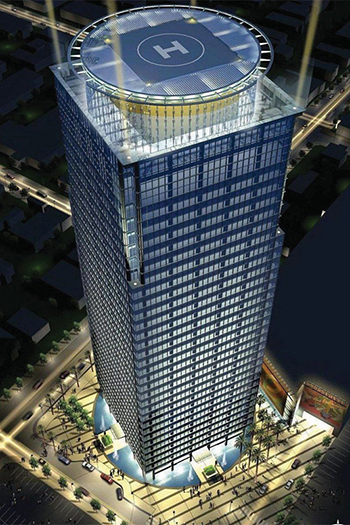 The 37-story tower has just gotten approval to add up to 415 residential units along with its office and commercial space. © Carrier Johnson Architects.
06 May 2020 | Santa Ana, United States

Apartments could be included in Orange County’s tallest skyscraper, a 37-story tower in Santa Ana, if the long-planned project ever gets off the ground.

City officials on Tuesday, April 21 2020 approved a request from the developer of One Broadway Plaza to allow up to 415 residential units along with offices and commercial space. The mixed-use project has been in the works for 20 years but previously did not include any dwellings.

Council members voted to approve a couple of resolutions and give initial approval to an ordinance that allows residences in the development planned for 1109 North Broadway.

The lone nay vote came from Councilwoman Cecilia Iglesias, who wants to postpone a decision for about a month to get more input from the community.  Iglesias noted that only minutes earlier the council voted against an apartment project it had previously approved, across from the Discovery Cube OC, because of community opposition and a referendum petition.

“It’s a little concerning to me,” Iglesias told her colleagues via teleconference. “We say one thing for one project, and say another thing for another project.”

Other council members said the project will offer much needed construction jobs to locals for some two to three years and, once completed, will become an “iconic” structure for Santa Ana. They also welcomed it as a sign of Santa Ana’s recovery following the coronavirus pandemic shutdown.

“As we come out of the virus…it will be a strong signal of the overall health of our city,” said Mayor Miguel Pulido.

It’s unclear when construction would begin. Pulido could not say Wednesday when developer Michael Harrah would break ground. Harrah could not be reached for comment.

The project was proposed in 1999 as an office building that, at 38 to 44 stories, would tower over all others in the county.

In 2005, Santa Ana voters approved the project via a referendum. But a coalition of residents and community groups who opposed the project tried to get a second referendum and took the matter to court in 2010. Critics argued that the city illegally changed development requirements that made it easier for the project to move forward. The coalition initially won, but an appellate court in 2011 overruled that first ruling.

Still, the project has stalled in the past decade.

In 2017, Harrah tried to woo Amazon to what he called “Orange County Silicon City.” The proposal included redeveloping the former Orange County Register building on Grand Avenue along with the One Broadway Plaza land in downtown.

In 2018, Harrah listed the property, as well as the former Register building site he now owns, with a real estate brokerage firm to find investors in what was billed as “The Downtown O.C. Collection.” At the time, he told the Register he was looking to find tenants, a partner or, if the price was right, possible buyers for the properties. Harrah had spent about US$90 million to buy the land, get city approvals and environmental studies, according to a CBRE real estate brochure from 2018.

As of Wednesday, the One Broadway Plaza property was still listed for sale with a different firm, Lee & Associates Commercial Real Estate Services.

The latest version of the project, as amended Tuesday night, would include up to 415 residential units in addition to approximately 200,000 square feet of office space, according to a city staff report.

Many if not most of the speakers who called in to the council’s teleconference meeting were from various labor groups and voiced their support for the project.

“This is the best time to do this,” said Ernesto Medrano, of the Los Angeles/Orange County Building and Construction Trades Council.

But at least one resident offered a different take on Harrah’s relationship with the city, saying, “He bleeds it dry.”

The resident asked for a new environmental impact report because the project is old and because it’s now been changed.

In letters and emails to the city, some residents made similar comments and said they want to see a new environmental impact report. Opponents complained that the project could generate increased traffic and congestion in what is already the county’s most densely-populated city. Several residents questioned why the developer is not planning to include affordable housing. Harrah plans to pay about US$4.7 million in-lieu fees instead.

There were more emails of support than opposition, most coming from members or leaders of local trade unions. One letter, from a resident, described the project as “a jewel on the horizon in the city.”

The council is expected to give final approval to the changes at its next meeting.

For more on this story, go to The Orange County Register.