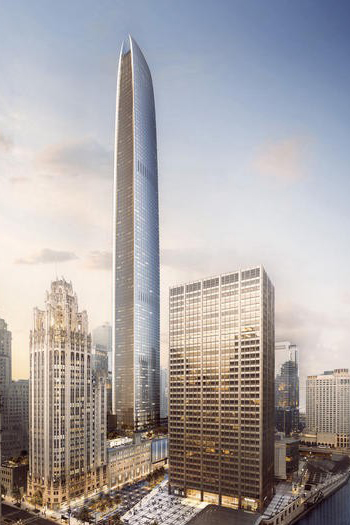 A 102-story skyscraper known as Tribune East Tower could become Chicago’s second tallest building in the coming years, after aldermen on Wednesday, 20 May, 2020 approved plans for the US$700 million project on what is now a parking lot just east of the landmark Tribune Tower.

The 1,422-foot (433.4-meter) glass-and-steel building would overtake Trump Tower as the city’s second-tallest skyscraper, and would be the third tallest building in the United States.

The building would include a 200-room hotel, 564 condos and apartments, a 687-stall parking garage, and 14 loading docks on Lower Michigan Avenue and Lower Illinois Street.

Only 11 of the apartment units would be set aside for renters earning 60 percent or less of the area’s median income. The developers would fulfill the rest of the project’s affordable housing obligations by paying more than US$13 million into the city’s Affordable Housing Opportunity Fund, which the city uses that fund to build housing in low-income neighborhoods.

The project also will pay US$15.1 million into the city’s Neighborhood Opportunity Fund in exchange for being allowed to build a larger building than typically allowed for the site. That fund was set up in 2016 to get developers to pay for the right to build larger projects downtown in exchange for paying into a pool designed to provide small business grants on to boost economic development on the South and West sides.

Ald. Brendan Reilly (42nd), who represents most of the downtown area, called the proposed skyscraper “an incredibly impactful project for the city of Chicago.”

Reilly said the final plan approved by the City Council on Wednesday, 20 May, 2020 was the result of more than two years of negotiations with the developers.

“We had no shortage of opinions and feedback from the neighbors,” Reilly said, noting that negotiations resulted in a number of changes to the original designs, including better integrated parking within the building, totally redesigned landscaping on Pioneer Court, and significant revisions to traffic and loading dock plans to improve traffic flow and public safety on the upper and lower levels of Michigan Avenue and Illinois Street.

The project will include new vehicle and pedestrian entries on Lower Michigan and Lower Illinois, two new security areas on the lower levels that will be manned 24/7, and specified pickup and dropoff areas for rideshare and commercial vehicles.

Reilly said the entire US$700 million project is privately financed, and will pay US$25 million a year in property taxes when complete.

Reilly also said the developer has vowed to meet with the Black and Latino caucuses of the City Council to discuss those goals, and will provide regular updates to the City Council as work progresses.

“This was a long and difficult negotiation. In fact it’s lasted closer to two-and-a-half years, but I think it’s one that has resulted in a far superior project, not just for the surrounding neighborhood, but for the city as a whole,” Reilly said.

Ald. Roberto Maldonado (26th) cast the lone no vote against the project, after complaining that the developers had yet to reach out to him as the chair of the Latino Caucus. However, Reilly said the mayor’s floor leader, Ald. Gilbert Villegas (36th) has been engaged in the negotiations, and Reilly assured Maldonado he will hold the developers to their promises.

“Our eyes will be on this project. The commitment will be met, or there will be significant consequences, but I am confident given the stewardship of Alderman Reilly, and the focus of members of the Economic Development and Zoning committees, that we will make good and true on the commitments that this developer has made,” Lightfoot said.

Construction is expected to begin on Tribune Tower East in late 2021 or early 2022. Reilly said the project will create an estimated 5,500 construction jobs and 400 permanent jobs.

For more on this story, go to CBS.