Plan for a 65-Story Residential Complex in Tokyo Gets Approval 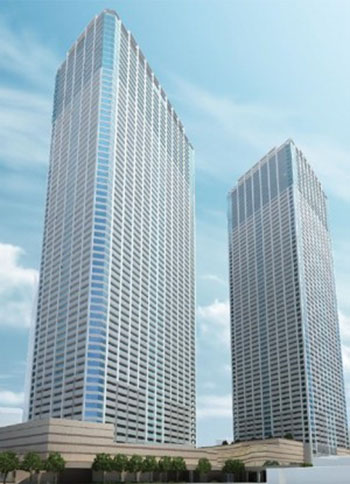 Shinjuku ward issued a town planning approval for the Nishi Shinjuku 3 Chome West District Redevelopment. This project includes two 65-story, 235-meter-tall apartment towers that will be the tallest purely-residential towers in Japan based on total floor count, and the second-largest development based on total unit count.

Currently the tallest apartment building in the country based on floor count is the nearby The Parkhouse Nishi Shinjuku Tower 60, which is 208 meters tall and has 60 floors. It was completed in 2017. The largest project based on total unit count is Harumi Flag, aka the new Athlete’s Village, which is under construction on Harumi island in Tokyo Bay. It will have 5,632 apartments. The Nishi Shinjuku 3 Chome West project will have approximately 3,200 apartments.

There is also the as-yet-unnamed Toranomon-Azabudai District redevelopment by Mori Building that will see a 330-meter-tall, 65-story mixed-use building with 80 apartments on floors 56 to 65. Completion is expected in 2023, according to the latest estimates.

Construction on the Nishi Shinjuku project is tentatively scheduled to begin in 2022, with completion by 2029. The 4.8-hectare site is across the street from the Park Hyatt Tokyo and Shinjuku Park Tower. This is a joint-venture between Nomura Real Estate, Tokyo Tatemono, Sumitomo Corporation, Maeda Corporation and Greater Tokyo Funenkousha.

Redevelopment discussions began back in 1993, with various plans floated throughout the years. In the early 2000s there was a plan for a four-tower development, including an office tower up to 339 meters tall. This was shelved after the global financial crisis.

For more on this story, go to Japan Property Central