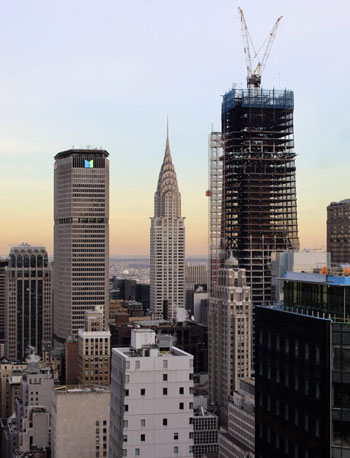 One Vanderbilt is officially the latest skyscraper in New York City to achieve a height equivalent to “supertall” (300 meters and higher) status. Located at 41 East 42nd Street in Midtown East, the ultimately 1,401-foot (427-meter) office building already soars above Grand Central Terminal, and new steel columns continue to sprout along the perimeter and core, having now punctured the 300-meter mark. Designed by Kohn Pedersen Fox, the upcoming 58-story tower is being developed by SL Green and will span 1.75 million square feet (162,580 square meters).

Currently, the building is only several floors away from reaching the first major setback. From there, the walls begin to radiate towards the center and form the sloped, tiered crown topped with an architectural spire. This upper section will be illuminated at night. The façade is continuing to rise on all sides, and should soon be substantially more visible from far away.

With the pace of construction and assemblage, One Vanderbilt should top out as early as mid-summer. Upon completion, it will dominate the neighborhood with its signature crown. Viewers from the top of the Rockefeller Center will easily see One Vanderbilt, the Empire State Building and the Chrysler Building peak over the Midtown skyline.

However, with the Midtown East Rezoning now beginning to affect the skyline, One Vanderbilt’s prominence may one day be encroached upon by at least two other new supertalls. The first is an office building at 270 Park Avenue that could soar above 425 meters. Foster + Partners Architects is designing the project, with no official renderings released yet. Demolition of the existing building is expected to wrap up next year, with completion of the new building around 2024.

The next is Harry Macklowe’s “Tower Fifth” at 5 East 51st Street. If built and completed, it would rise 1,556 feet (474 meters), potentially making it the tallest skyscraper in New York City by roof height. A proposed cantilevering observation deck could take the title as the highest outdoor observation deck in the city. Regardless of height and status, these projects show the relentless pace of construction that New York City has seen, which should continue to add to the verticality of its famous skyline.

One Vanderbilt is expected to be completed sometime in 2020.