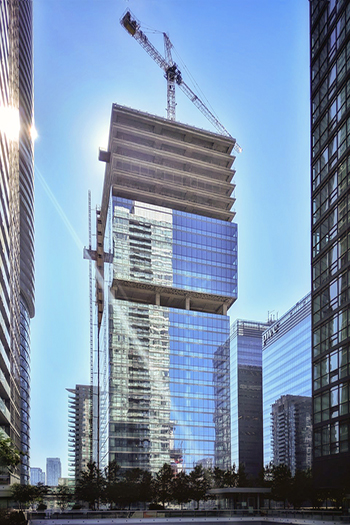 In just over a decade, all four corners at York and Bremner in Toronto’s South Core have been populated by new towers. The last of these corners—at the southwest side of the intersection—is the site of 16 York, a 32-story architectsAlliance and B+H Architects-designed office tower developed by Cadillac Fairview.

Construction of the CAD$479 million (US$367 million) office building has been ongoing since May 2017 and is expected to be open within a year. Construction recently reached an important milestone with the completion of concrete forming for the building. A view of the tower’s upper levels shows that the final office level, floor 32, had been formed and topped by a penthouse level above.

“Construction of the office building has been ongoing since May 2017.”

Cladding installation continues to enclose the tower in reflective blue-tinted curtain-wall glazing, now stretching just six levels shy of the tower’s roofline. The tower should be fully enclosed over the course of the 2019 summer.