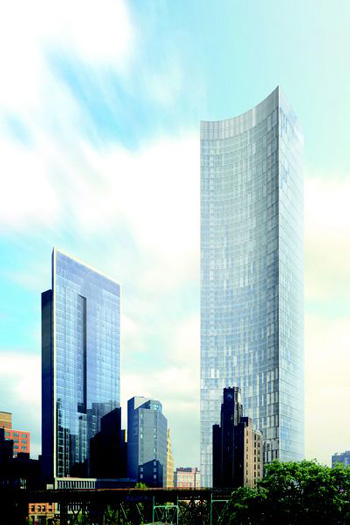 Renderings discovered by New York YIMBY and confirmed as current by site owner Durst Organization illustrate that the 710-foot (216-meter) tower will feature a shiny concave façade that frames the clock tower. The building will boast interiors helmed by Selldorf Architects and is planning for 958 rentals, of which 300 will be affordable.

The Durst Organization purchased the property in 2016 from developers Property Markets Group and the Hakim Organization, which were at one point planning to construct a 915-foot-tall (279-meter-tall) tower that would have been the borough’s tallest.

Building amenities are slated to include a 20,000-square-foot (1,858-square-meter) fitness center, a resident’s library, coworking space, a children’s playroom, and an outdoor pool. Additionally, as part of the development, the Clock Tower building will be repurposed into commercial and retail space, designed by architect Morrell Smith.

Once the building tops out at 63 stories, it could hold the title for the tallest residential building in Queens, though it could quickly be dethroned by a project taking shape at 23-15 44th Drive that could reach a whopping 78 stories.

For more on this story, go to Curbed New York.