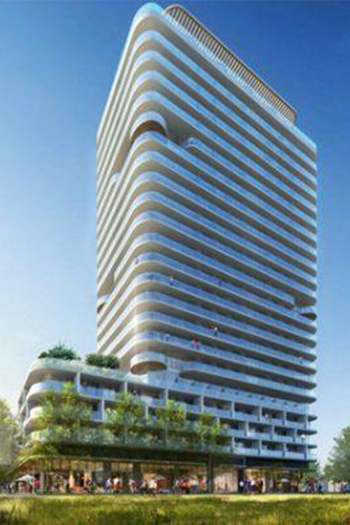 Matis Cohen and the Galbut family’s proposal to significantly make over Miami Beach’s Carlyle and Byron avenues scored an important approval on 2 October 2019. The city’s design review board granted two waivers for 72nd and Park, a major mixed-use project the developers propose for North Beach under new development guidelines the city approved for the neighborhood in 2018.

KGTC, LLC wants to build a 22-story tower from 71st to 72nd streets, between Carlyle and Byron avenues.

Arquitectonica is designing 72nd and Park, which will have 283 multifamily units, including 125 micro-units smaller than 550 square feet (51 square meters). The mixed-use development would also have roughly 12,500 square feet (1,200 square meters) of retail and restaurant space, amenities and parking. In order to build it, the developers sought waivers to allow separate driveways for the parking and loading portions of 72nd and Park, as well as an additional 20 feet (six meters) to the 200-foot (61-meter) height limit.

Under the new regulations for the North Beach Town Center area, developers building properties greater than 50,000 square feet (4,600 square meters) and located north of 71st street can request an additional 20 feet (six meters) of height based on the merits of a project’s design. “The site encompasses the entire block,” said Raymond Fort of Arquitectonica. “It is a mixed-use podium of retail and parking. Sitting on top is the residential.”

Fort told the design review board that the apartment building component is on the northern side of the proposed project, so it doesn’t loom over 71st Street, which is the main street for the North Beach Town Center. “On the ground floor, we have worked closely to put together a streetscape that is unique to the neighborhood,” he added.

According to KGTC’s letter of intent, 72nd and Park’s residential mix will include co-living units and traditional studio, one-bedroom, two-bedroom and three-bedroom floor plans that feature large glass windows and expansive open balconies. In addition, the tower is designed within a reduced building footprint that allows for substantial open space and landscaping on the fifth-floor pool deck, the letter states.

Ana Bozovic, a broker who runs market research firm Analytics Miami, was among a half-dozen attendees speaking in favor of the project because 72nd and Park will add new market-rate housing in Miami Beach. “Simply put, we don’t have housing stock for people moving to the region to work,” Bozovic said. “We only have expensive buildings and old buildings.”