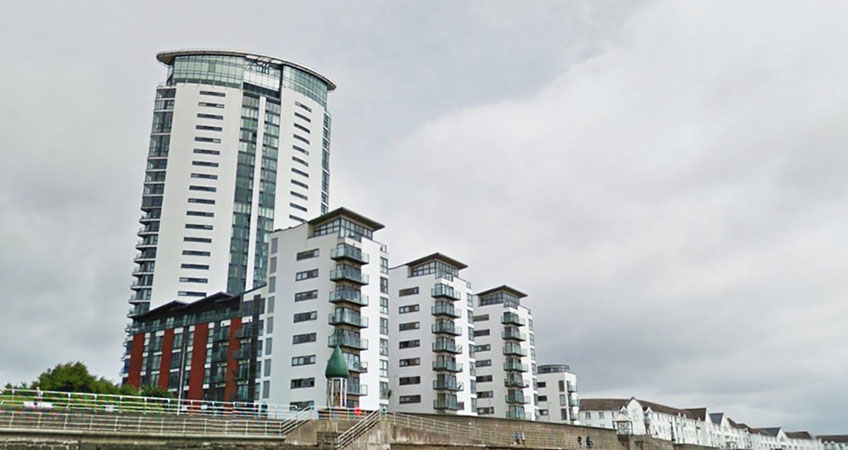 The full cost of repairs to correct defects at Swansea apartment blocks surrounding Wales' tallest residential building has been unveiled, and the tower is next. Photo Credit: adrianwhitephotography
19 September 2019 | Swansea, United Kingdom

More than 200 leaseholders at the The Meridian Quay development in Swansea have been told they must pay thousands of pounds for urgent fireproofing by the end of September.

According to a letter sent to residents, leaseholders will have to foot a share of the GB£5,130,057 (US$6.4 million) bill to the Meridian Bay and Wharf blocks, but another huge bill is expected next year, as residents of Meridian Tower, Wales’s tallest residential building, learn the amount they will have to pay to rectify defects.

The demands followed an improvement notice issued by Swansea Council, which was said by CRM to be legally binding, and which demanded the remedial works be completed. All work must start by October.

“The building firm behind the huge project had previously gone into liquidation.”

The building firm Carillion, which was behind the huge building project, had previously gone into liquidation with liabilities of more than GB£7 billion (US$8.7 billion).

The CRM management group is now seeking to claim at least part of the cost of the repairs from the leaseholders, claiming the cost is a service charge item.

In a letter sent to leaseholders, the group gave a new cost for repairs, which it expected insurers to contribute to, but with leaseholders each paying in excess of £2,614 (US$3,262), regardless of the number of bedrooms. The costs had not yet been agreed by the insurer, and could be subject to deductions before a final figure is given. As the insurance matter is decided, residents of the blocks face a ticking clock to meet the payment deadline.

One of those affected, who wants to remain anonymous, said: “There will be loads that can’t pay, and I won’t be paying anything until insurance pays out.” He added, “They said they will take out legal action against those who don’t pay. I think this will escalate as loads of people won’t pay it. I think it’s a disgrace that they are putting all this on the residents.”

For more on this story go to Wales Online. The Tower at Meridian Quay