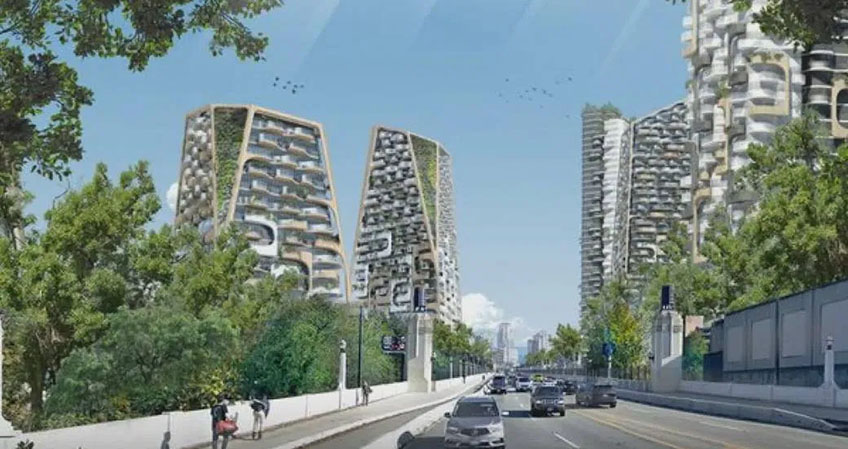 The cluster of towers, with their undulating balconies and fins, will make an instant mark on Vancouver’s skyline.
15 November 2019, Vancouver, Canada

The Squamish First Nation has extensive plans to build upon their land in Vancouver. The proposal includes 6,000 units across 11 towers within a 500-acre (202-hectare) land parcel. The project would radically transform the city’s Kitsilano neighborhood from a low-rise residential area to a dense urban center.

The project, named Senakw after the site it occupies, is expected to cost an estimated CA$3 billion (US$2.27 billion). As Senakw is situated within the reserve boundaries of the Squamish band government, the Squamish Nation is not required to comply with the City of Vancouver’s regulations and processes regarding development, meaning construction could begin rather quickly and without the typical oversight delays.

Additionally, the projected is not limited by municipal zoning, and initial renderings by Vancouver’s Revery Architecture depict an unconventional vision. Located near the foot of the Burrard Bridge, the cluster of towers, with their undulating balconies and fins will make an instant mark on Vancouver’s skyline. The Squamish planning group hopes to work closely with Vancouver city staff to construct a cohesive vision for the site.

“The towers will not make use of the podium design typical in projects of this scale, instead making 80 percent of the ground-level land available for public use and green space.”

The tallest structure is expected to top out at 56 stories, a shade shorter than Shangri-La and the Trump Tower, just across the bridge from the downtown peninsula. The towers will not make use of the podium design typical in projects of this scale, instead making 80 percent of the ground-level land available for public use and green space.

According to Squamish Councilor Khelsilem, the ideas for 6,000 “mostly rental” units stems from a critical shortage of rental housing in Vancouver. Moreover, the development holds importance in the context of the historical treatment of indigenous peoples in the Vancouver area: “This is a government doing a project that has a particular history of injustice in the removal of our ancestors in 1913, who were evicted by the provincial government at the request of the Vancouver parks board and the City of Vancouver,” said Councilor Khelsilem.

Final decisions for the project will be made in December, when the band government votes in a referendum.

For more on this story go to Architect’s Newspaper.