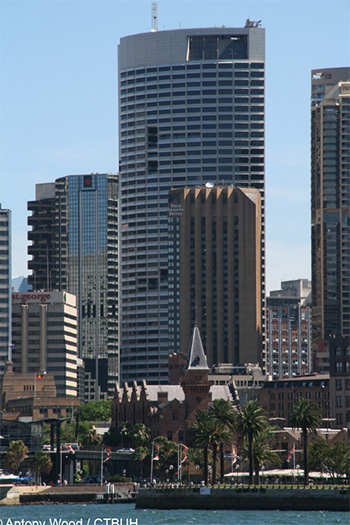 Dexus and its office partnership fund have raised AUD$925 million (US$673 million) from the sale of a half share in the Harry Seidler-designed Grosvenor Place office tower in Sydney.

However, due to the building’s current 11 percent vacancy rate and the short-term leasing risk associated with the asset, the sale was sealed at a 5 percent discount to the property’s book value on 30 June 2020.

Dexus said the sale was motivated by the fact that it did not manage the site and so was not able to generate fees above and beyond monthly rents.

The buyer was Chinese sovereign wealth fund Chinese Investment Corp, which owns the remaining half and is now seeking Foreign Investment Review Board approval, with settlement expected in early 2021. CIC operates under the management of Mirvac in Australia. Dexus owns 25 percent and the Dexus office partnership owns the remaining 25 percent of Grosvenor Place.

Dexus has confirmed it has made an approach to AMP Capital for its diversified property fund amid speculation it could look at the whole funds management platform. Lendlease is also a strong contender for the AMP Capital business.

Sitting at the northern end of the newly-revamped George Street, Grosvenor Place is a 45-level, premium grade office tower designed by Harry Seidler and built in 1988.

The property interest is leasehold, with 78 years remaining on the ground lease. The major tenants include Deloitte, which is moving to AMP’s Quay Quarter in late 2021 and Wilsons Parking.

Dexus bought its initial interest in Grosvenor Place in 2013, with the investment generating an annual total return of about 12 per cent since acquisition.

Despite the impact of the global pandemic on office leasing demand, where a majority of office workers remain at home, demand for owning the hard assets remains solid, particularly from overseas investors.

CBRE Research’s capital flows report, covering the period from the start of the pandemic in late March to the end of September 2020, revealed offshore investors accounted for around 40 percent of all Australian property transactions, which is slightly above the long-term average.

Simon Rooney and Flint Davidson of CBRE and joint agents Rob Sewell, Luke Billiau and Simon Storry from JLL advised on the sale.

Mr. Rooney, head of retail capital markets, said the Grosvenor Place transaction is one of the largest and most competitive office transactions to occur globally in 2020 and demonstrates the underlying strong investor appetite for core products in gateway cities, particularly among foreign buyers.

“Offshore investors…are relative investors and Sydney, more than ever, is viewed positively on a regional and global basis,” Mr Rooney said.

For more on this story, go to Commercial Real Estate.