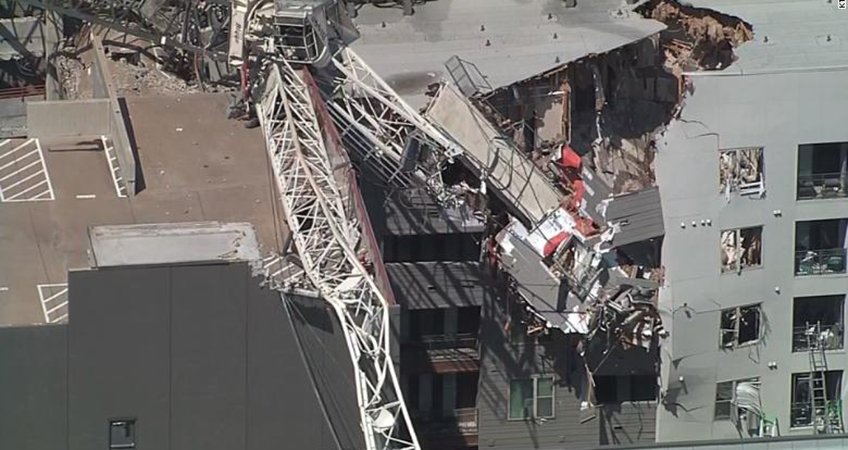 A crane collapsed onto an apartment complex in Dallas, killing one.
10 June 2019 Dallas, United States

At least one person has died and six were injured after a crane being used on the under-construction The Gabriella fell onto an apartment complex in downtown Dallas, according to Dallas Fire-Rescue spokesman Jason Evans.

The crane fell onto the Elan City Lights apartment complex, with the worst of the damage on the eastern residential side and a parking garage for the building, Evans said. Dallas firefighters have live-find rescue dogs on scene to search the property for missing and injured people.

“This is a really challenging situation, in the sense that I cannot personally recall that we’ve had a crane collapse that involved an already-inhabited building,” Evans said.

“Our hearts go out to everyone who has been impacted by this incident. We only hope that the damage that’s been inflicted thus far is where it stops.”

Jones says one patient is in critical condition, another is in serious condition, and the third was treated and released.

Three other patients were taken to Parkland Memorial Hospital in Dallas, but a spokeswoman for Parkland could not give CNN condition updates.

Multiple videos of the crane collapse show the crane rocking back and forth before eventually falling. Several witnesses told CNN they saw the crane falling.

Abbey Kearney lives in the apartment complex with her husband, on the opposite end of the building from where the crane hit, she told CNN Sunday.

“It was like a sunny, beautiful day and people were at the pool,” she said. “And then it just got dark very quickly and the wind picked up something fierce. It got dark and it was over in a matter of seconds.”

Once it got dark, she said she and her husband went out on their patio, which overlooks the complex’s pool. That’s when three umbrellas shot straight into the air and all the pool furniture went into the pool.

Then Kearney and her husband saw the crane fall.

“It just sliced through the building … like a hot knife through butter. It went from the fifth floor to, from what I can tell, the third floor,” she said.

“It just sliced through the building … like a hot knife through butter.”

The crane also fell onto the parking garage, Kearney said, so she and her husband went to go check on their vehicles.

“We just saw cars everywhere. I don’t even know how to describe it. There were cars that were vertical, there was cars from maybe the eighth floor all the way down into the third floor where we park,” she said.

“We don’t quite know if our car is there, we haven’t been able to get into our apartment to see if it’s OK or to see if there’s any damage,” she told CNN.

For more on this story, go to CNN.