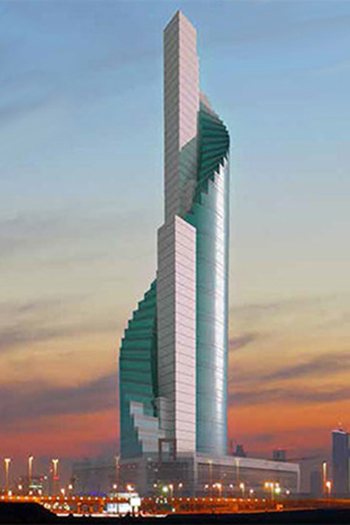 The luxury residential building will have a unique spiral architectural style, which will enfold a total built-up area of 64,000 square meters across 41 stories.
16 March 2020 | Manama, Bahrain

Bahrain-based Kingdom Group has signed a major deal with Orchid Building Contracting to supply building materials for the construction of the 41-story Spiral Orchid Residence in Water Garden City, as part of Manama’s Seef District.

As per the 18-month contract valued at BD2.5 million (US$6.6 million), a number of companies under the umbrella of the Kingdom Group will supply a range of materials that they produce as a package, including ready-mix concrete, blocks such as standard as well as autoclaved aerated concrete (AAC) blocks besides cement and washed sand for the construction of the prestigious tower, which is owned by Orchid Developers.

The contract was signed by Bashar Ahmadi, the Owner of Orchid Building Contracting as well as Orchid Developers, and Abdulla Shehabi, the Managing Director of Kingdom Group, a leading building materials manufacturer and supplier.

Commenting on Kingdom Group’s latest success, Shehabi said “having set a benchmark for standards of building materials with our supply contract for the United Tower in Bahrain Bay, we have been keenly looking at participating in the most prestigious projects in the country, particularly mega-developments or special high-rises. We track projects right from the time building permits are issued and follow up until the projects reach the procurement stage.”

“This is one of the biggest projects Bahrain has seen in the past two years and we were determined to secure this contract,” he added.

The Spiral Orchid Residence is a luxury residential building with a unique spiral architectural style, which enfolds a total built-up area of 64,000 square meters.

The freehold property, which is also open to expatriate investors, will comprise 364 residential units most of which will face the Persian Gulf. Residents will enjoy access to the beach and will be near downtown Bahrain and Water Garden City.

A key factor in securing the contract was that Kingdom Group has already supplied one of Orchid Developers’ recent projects, the Orchid Plaza.

Kingdom Group achieved another large concrete pour in the country at 8,250 cubic meters for the United Tower, also in Manama.

The design of the prestigious landmark has been conceptualized by Bashar, while Kooheji Consulting developed the detailed design and Global Engineering will be supervising the construction of the project.

According to Bashar, the project is expected to be completed in two-and-a-half years and 50 percent of the units have already been sold.

For more on this story, go to Gulf Projects.