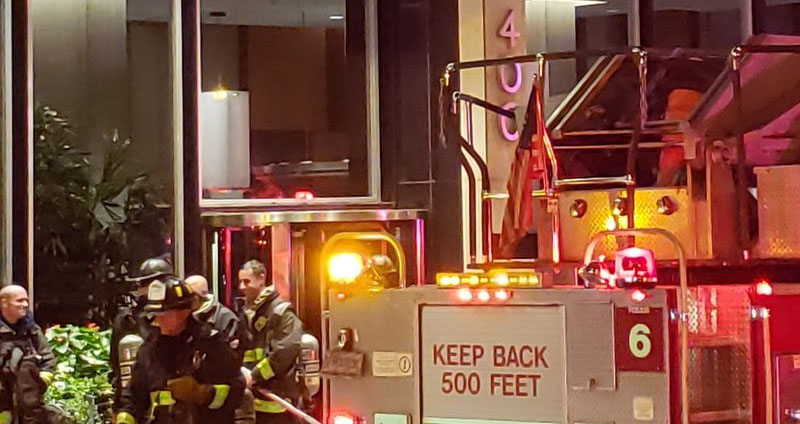 David Kuta thought about his next-door neighbor when he opened the front door of his 32nd-floor condo on the Near East Side and saw thick smoke rolling across the ceiling early Tuesday.

The man was older and used a motorized wheelchair. Kuta said he took a few steps toward his neighbor’s door but the smoke engulfed him. He went back inside, put a wet rag on his face and ventured back out. This time he crawled on the floor and reached the door, calling out, “Is there a fire? Can you get out?”

The smoke was suffocating and Kuta said he retreated to his condo, put on swimming goggles and used his phone’s flashlight to help see down the hallway because the overhead lights weren’t any help.

Other neighbors had left their units by this time but couldn’t get off the floor, so Kuta said he let them inside his home and onto the balcony. “The smoke was more than I could have ever imagined,” Kuta, 46, said. “I never thought it could’ve been that bad.”

Kuta said he made it to his neighbor’s door again, but still couldn’t open it. He backed out and went inside his condo. Making another try, he opened his door and saw firefighters standing in the hallway. They told him to keep his door shut and open the windows. Kuta also put a wet towel at the bottom of the door frame.

Firefighters responded to the 40-story building at 400 E. Randolph Street in the early morning of September 15, according to Chicago Fire Department spokesman Larry Merritt. An emergency medical services plan 2 was ordered, sending at least 10 ambulances to the scene.

The fire was contained in one unit and put out at 1:24 a.m., Merritt said. The fire spread throughout the unit, so it was not immediately known where it began. Police said the cause appeared to be electrical.

Kuta said he was relieved to hear firefighters were able to get to his neighbor. The two often saw each other at the building’s pool and chatted about the Bears or the Cubs.

“It was scarier than I thought,” he said. “I just didn’t know it could get that bad that fast.”

Kuta and the other neighbors stood on his balcony, covered in soot, as they watched firefighters spray down his neighbor’s unit and break out the windows.
He and his wife considered taking an air mattress to his office for the night, but he didn’t think he would get much sleep anyway.

For more on this story, go to the Chicago Tribune.