Another Proposal Rejected for Contested Site in London 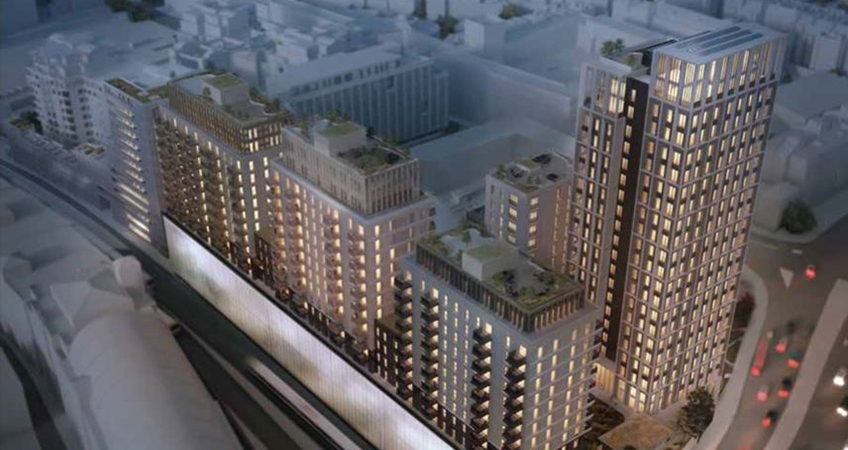 John McAslan Architects has become the latest in a string of architects to have proposals rejected for the redevelopment of land around Tesco Store near Earl’s Court in west London.

Kensington and Chelsea Council’s planning committee turned down the practice’s proposals for the car park surrounding the superstore site at 100 West Cromwell Road – a plot with a complex planning history stretching back more than a decade.

The latest proposals for the 1.7-hectare site included an increase in affordable housing from 11 percent to 35 percent, as well as a community leisure hall and a gym with swimming pool.

But councilors raised concerns over the quality of the proposed housing and the scale of the development, which they argued would “overshadow” residents in the neighboring Warren House.

“Councilors raised concerns over the quality of the proposed housing and the scale of the development, which they argued would “overshadow” residents in the neighboring Warren House.”

An officers’ report recommending refusal described the development as comprising a “range of excessively tall and over-scaled buildings that serve to dominate the immediate context.”

John McAslan Architects is the fourth architect to draw up plans for the site, with its plans replacing Benson + Forsyth Architects’ competition-winning scheme for Spenhill Developments, approved in 2017.

Benson + Forsyth was selected following an architectural competition, held in 2009, and judged by representatives from the council and government design watchdog CABE.

John McAslan was also on the shortlist that time, along with Peter Barber, Feilden Clegg Bradley Studios, David Chipperfield and Denton Corker Marshall.

However, the scheme was abandoned following the sale of the site to Meyer Bergman, which has since criticized the designs as “outdated” and including “complicated buildings that were difficult to build.”

Benson + Forsyth itself replaced Bolles+Wilson, which had designed a scheme for Brookfield Multiplex that was later withdrawn. The AJ reported at the time that the developer had come under pressure from the local authority to change its high-rise designs.

Another 27-story scheme designed by Woods Bagot for housebuilder Persimmon Homes was turned down by the council in 2007.

A Kensington and Chelsea spokesperson said: “Committee rejected this large development for a range of reasons, with the chair of the committee particularly noting the impact it would have on residents in Warren House, a property the scheme would literally overshadow.”

Responding to the news, a “disappointed” spokesperson for site owners Meyer Bergman and development managers Londonewcastle said: “The proposed scheme would have delivered a total of 427 homes, 145 of which were affordable and half of these would have been for social rent.

“This represents a 537 percent increase compared to the currently consented scheme and is a real missed opportunity to deliver much-needed housing for RBKC and London.

“In addition, the proposals would have delivered a new community sports hall, a pool with access for local schools and over an acre of landscaped public open space alongside new commercial offices.

“We will now take some time to review the reasons for refusal before considering our next steps.”