Waterfront City with Over 3,000 Apartments Proposed in Jakarta 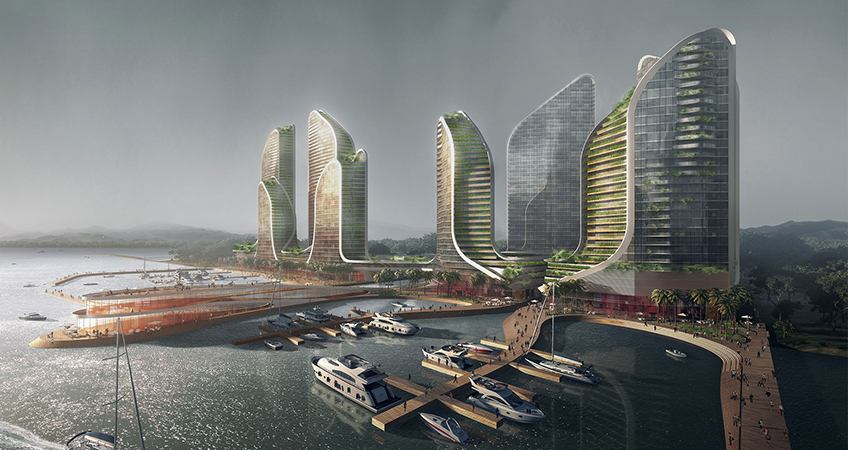 A series of apartment towers inspired by the natural environment of Indonesia are part of the luxury waterfront developed proposed for Jakarta.
15 May 2019 Jakarta, Indonesia

The 9,000 square-meter development, located at the popular seaside destination Ancol in north Jakarta, will comprise over 3,000 apartments across a series of towers, with a luxury waterfront living concept designed by Sydney-based architect Koichi Takada.

The privately-owned Crown, established in 1996, has evolved from a boutique operation to an enterprise with an established portfolio of projects across Australia and Indonesia in its pipeline worth AU$5 billion (US$3.4 billion).

Crown Group chief executive Iwan Sunito said the first Crown Group project in his home country, Indonesia, would herald a “new era for waterfront living” in the island nation and set a new benchmark for residential property development within the country, set to launch to market in 2020.

“The vision is to create a landmark that will be the jewel of Indonesia and a marina that the world hasn’t seen before,” Sunito said. “We will be the first to bring waterfront living to Jakarta, inspired by the world’s best – Sydney’s famous Darling Harbour and Circular Quay – through the development of vertical mixed-use residences.”

The 4.7-hectare development site, located on the edge of the land facing the Java Sea, was planned in accordance with government organization PT Pembangunan Jaya Ancol, best known for developing Ancol Bay in the 1980s, the largest tourist park in Southeast Asia.

Architect Koichi Takada said he had drawn on elements of Indonesia’s natural environment and cultural heritage to create a contemporary development with a connection back to Indonesian culture.

“We looked to Raja Ampat Papua, the Indonesian archipelago off the coast of West Papua, also known as the Four Kings, for inspiration, and the Green Canyon in Pangandaran Beach,” Takada said.

“We looked to Raja Ampat Papua, the Indonesian archipelago off the coast of West Papua, also known as the Four Kings, for inspiration.”

“You go through all these traditional villages and houses in between the skyscrapers, and experience the city on a human scale, in all these in-between spaces. We wanted to capture that experience.”

The proposal will go before the Indonesian government for approval later this year.

If approved, the first stage is expected to be completed in 2024 with 800 apartments, a gym, spa and infinity swimming pool.