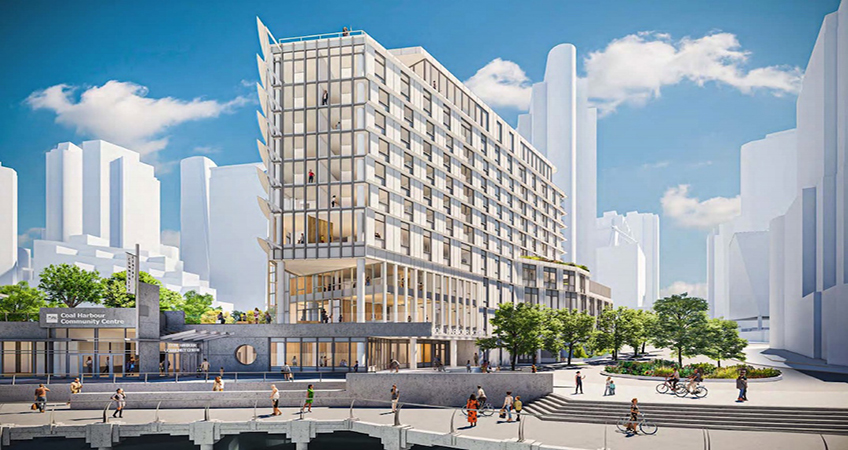 Plans to build an elementary school and social housing on the Coal Harbour waterfront in downtown Vancouver are moving forward. The surface parking lot next to the Coal Harbour Community Centre will be redeveloped into an 11-story building.

Despite some community opposition, in a unanimous decision, the Vancouver City Council approved the rezoning application for 480 Broughton Street. The city’s Development Permit Board approved the development permit application in March.

Designed Henriquez Partners Architects to take on a slender ship-like form, the first three floors of the 139-foot-tall building will house a 3,995 square meter (43,000 square foot) elementary school for up to 340 students. The existing public park will also double as the school’s playground.

A 892 square meter (9,600 square foot) childcare facility will take up the 4th floor, with an outdoor play space on the podium’s roof.

The remaining floors will be social housing, with 60 units ranging from studios to three-bedroom units. The project will be topped off with a common residential amenity level.

BC Hydro, which is funding the Coal Harbour school, plans to build a major new substation beneath the park. Electrical demand within Vancouver is expected to rise by 75 percent over the next three decades.

City staff say a school and a social housing component have been planned for the site since the 1990s, but it was stalled due to a lack of funding. The project is expected to carry a total construction cost of CA$ 81 million (US$ 64 million). It is targeting Passive House and LEED Gold certification.

Construction could begin as soon as late 2021.