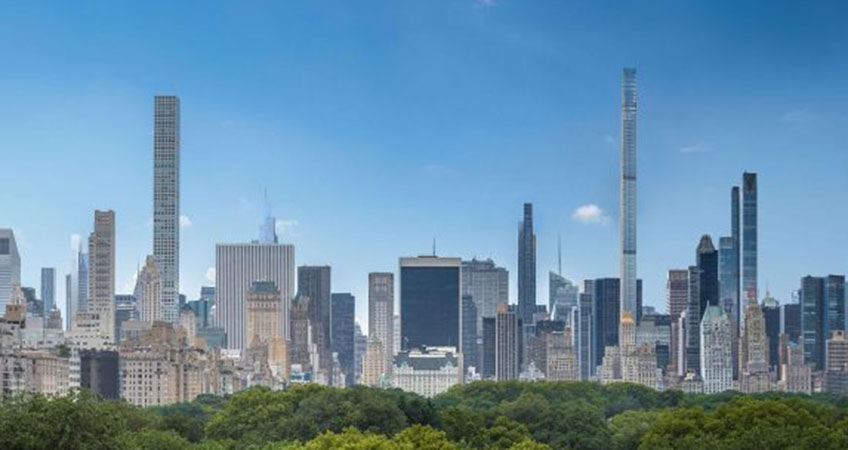 The $3.3 billion tower takes up an entire block bounded by Madison and Vanderbilt Avenues to the west and east, and East 43rd and East 42nd Streets to the north and south.

This has been a significant week, and summer, for One Vanderbilt. The speed of construction is unprecedented for modern office towers in New York City, and compares to the Empire State Building’s completion nearly 90 years ago.

And in the same week, along “Billionaires’ Row”—as 57th Street in Midtown Manhattan is nicknamed— a ceremony in the concrete shell of a duplex on the 107th floor feted the topping out of  Central Park Tower, which is 131 stories and 1,550 feet (472 meters) high.

The project is designed by Adrian Smith + Gordon Gill Architecture, a firm committed to the design of high-performance, energy-efficient and striking architecture. Central Park Tower’s façade features combined elements of glass, satin-finished stainless steel, and light-catching vertical and horizontal details that accentuate the interplay of texture and light. At 300 feet (91 meters) from the street, the tower cantilevers to the east, creating Central Park views for all north-facing residences.

Developer Extell secured the right to build Central Park Tower by buying 6,000 square feet (557 square meters) of “air rights” from surrounding buildings. Its 1,550-foot height makes it even taller than One World Trade Center without its crowning spire.

The building’s 179 two- to eight-bedroom apartments, which went on sale last fall and start on the 32nd floor, start at $6.9 million. The most expensive unit currently available is a five-bedroom on the 112th floor asking $63 million. The apartments are designed by Rottet Studio.

The priciest condos—like a three-floor penthouse—are speculated to sell for more than $100 million.

Central Park Tower is slated to be complete in 2020, when the first closings will take place.

The vistas are truly panoramic—spanning the Empire State Building, One World Trade Center and Hudson Yards to the south, the Hudson River, George Washington Bridge and New Jersey to the west, and LaGuardia and John F. Kennedy airports to the east.

Residents will have access to the Central Park Club, made up of 50,000 square feet (4,645 square meters) of amenities for residents only, including an outdoor terrace with a pool, a wellness center with an indoor pool, and a ballroom and cigar bar on the 100th floor.

For more on this story go to MGM Nesagram and NBC 4 News and The New York Post.