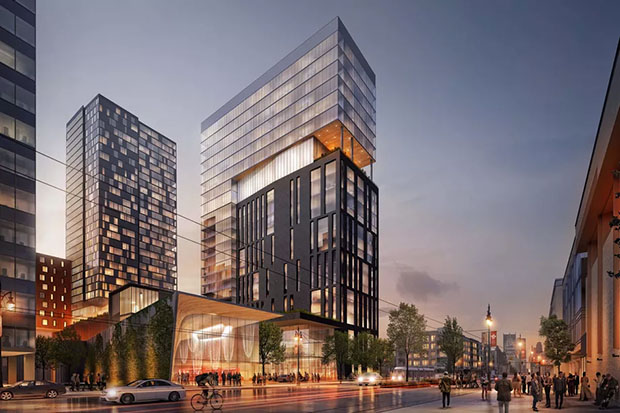 Two new skyscrapers will be constructed in Midtown just north of the Whole Foods at Woodward and Mack avenues. The project, dubbed The Mid, will be a pair of 25 and 30-story buildings, making it the largest development north of Mack since the 1920s.

An entity tied to Ciena Healthcare CEO Mohammad Qazi, 3750 Woodward Ave LLC, is undertaking the project. The total cost is estimated at $310 million.

The 25-story building will be the 228-room Thompson Hotel, with luxury condos making up the top nine floors. Assuming brownfield financing is secured, it’s slated to be completed in December 2020.

Construction on the 30-story building is expected to start several months later. The mixed-use, multi-family development will have 250 apartments and first-floor retail.

“This transformational project is another example of the continuing high-level of investment and activity in Midtown,” said Sue Mosey, executive director of Midtown Detroit Inc., in a press release. “We’re excited to welcome The Mid because it will add so much to the area—housing, needed services to residents, create more traffic for existing businesses, and serve as an attraction to patrons frequenting Midtown’s thriving food and entertainment district.”

Because it will cost more than $75 million, the project is also subject to the city’s community benefits ordinance, which requires the convening of a Neighborhood Advisory Council that will negotiate the terms of the benefits.

Other details of the development include 744 parking spaces in above and below ground parking structures, as well as a 12-story “co-living” tower just north of the apartments.

For more on this story visit Detroit Curbed.