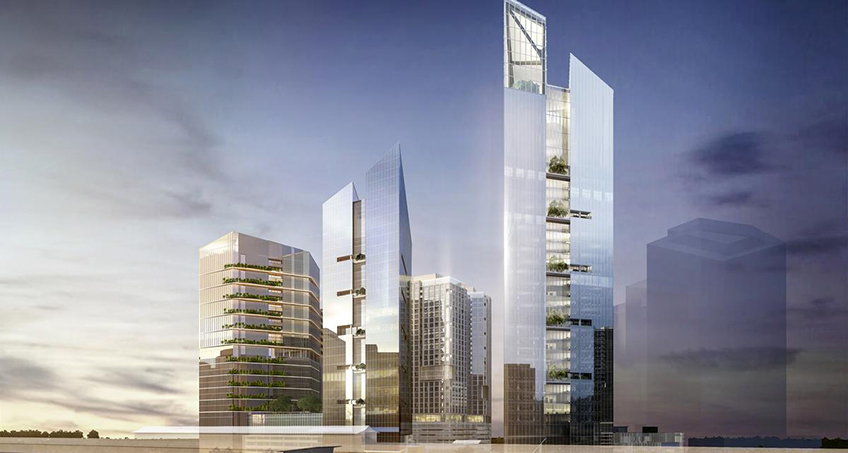 A large mixed-use development near the Wiehle-Reston East Metro station just earned a green light from the Fairfax Board of Supervisors. To the southeast, a massive six-building project with upwards of three million square feet (278,709 square meters) in Tysons Corner was also approved.

Near Wiehle Avenue, Fairfax County’s Board of Supervisors gave its unanimous approval to zoning changes for a 1.3 million-square-foot (120,773-square-meter) development dubbed Campus Commons, though some neighbors have concerns about how the project will connect with the rail station.

New York-based TF Cornerstone is backing the project, which is set to transform an aging office park located just to the east of Wiehle Avenue. The developer is pitching a three buildings with a total of 655 apartments, more than 522,000 square feet (48,495 square meters) of office and about 28,400 square feet (2,638 square meters) of ground-floor retail. It will include a multifamily building with a 24-story tower and two smaller, additional wings, a residential-over-retail scheme and an office building.

The project is one of many in the pipeline around Reston’s first Metro station, yet Campus Commons attracted a bit more community consternation than other developments in the area. It sits a bit closer to single-family neighborhoods than other projects built directly atop the Metro station, drawing intense concerns about its impact on traffic.

“TF Cornerstone ultimately agreed to substantially shrink its plans since first proposing the development in 2017.”

Community pushback was so intense that TF Cornerstone ultimately agreed to substantially shrink its plans since first proposing the development in 2017, slicing about 440 units and cutting the office building down from 14 stories. The developers also increased the setbacks of buildings from Sunrise Valley Drive and added more open space and an amphitheater to a planned park to meet local complaints.

Nevertheless, the development still attracted the opposition of the prominent Reston Association, the Reston Citizens Association and many other local groups monitoring developments. Some neighbors even formed a new group dubbed “Save Our Sunrise” to fight the project, particularly over concerns that TF Cornerstone hadn’t created an adequate pedestrian link to the Metro station.

In a statement, TF Cornerstone Vice President Kenneth Houle said his company is “proud to have made many adjustments based on their feedback” in order to “be a good neighbor and create a great project for all.” In particular, he pointed to the firm’s work on studying new pedestrian connections to the Metro as evidence that the developer is listening.

TF Cornerstone now plans to study three potential designs of a pedestrian bridge over Wiehle Avenue, which would allow residents to reach a nearby connection over the toll road and make it to the Metro. It is pitching bridges designed to be evocative of the one linking the Kennedy Center to its new REACH addition, though TF Cornerstone is also willing to consider a tunnel under Wiehle instead.

The developer hopes to convene a group of community members to evaluate those options, and will eventually either build the new bridge or give the county $1.5 million to do so (whichever costs less).

Several citizens spoke at the board’s meeting to raise concerns that TF Cornerstone is planning an at-grade crossing over Wiehle as an interim solution, which they believe will endanger pedestrians on such a busy road, or even convince some residents to rely on their cars instead.

“I would need to cross between 33 and 36 lanes of traffic to walk there, even though I live nearby,” Donna Gough, a leader with the Coalition for a Planned Reston said. “That’s on the county to fix.”

They also noted that the Virginia Department of Transportation controls some of the land in the area, and officials with the agency have expressed doubts that they’d allow a landing for a bridge to be built there.

The developer does not yet have a timeline or phasing plan for Campus Commons, and will now start work on marketing the project to prospective office and retail tenants.

Earlier in the month, the Board of Supervisors also unanimously approved The View at Tysons, a massive six-building project with upwards of three million square feet (278,709 square meters) near the Spring Hill Metro station in Tysons Corner. The overall development will include two residential buildings with retail, one hotel and residential building, and three office buildings.

The focal point of the development, however, will be the Iconic Tower, an office building rising 600 feet (183 meters) with an observation deck. While the lower 400 feet (278,709 meters) of the building will be occupied by office space, the upper 200 feet (61 meters) will be unoccupied, making for a purely architectural element of the structure.

“The Iconic, the tallest building between Philadelphia and Charlotte, will be visible as a signature element of the region’s skyline and will feature expansive views from the Blue Ridge Mountains to the National Cathedral and Washington Monument,” the development website reads.

The first phase of The View at Tysons is expected to break ground in spring 2020.

For more on this story go to Washington Business Journal and UrbanTurf.