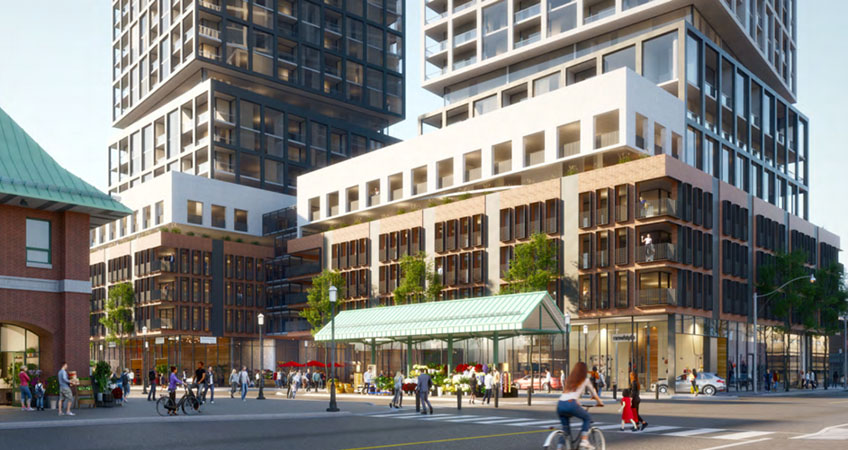 City councilors have approved the construction of a twin-tower project in downtown Barrie, a city of 141,000 residents in Central Ontario. Several concerns were raised by residents over the project.

The developer was granted an exception to the city's maximum building height rules, paving the way for a pair of 32-story residential towers atop a seven-story podium in the Theatre Block on Dunlop Street West.

Barrie Waterfront Developments was seeking a zoning-bylaw amendment for properties located at 39-67 Dunlop Street West and 35-37 Mary Street. The developer's plan was outlined during a presentation in June 2019.

Local resident Melissa Peyton spoke out against the proposal in a letter to council, outlining how she believes the project will affect the downtown, particularly rental costs and a lack of affordable housing. "Many of those currently residing in this area cannot sustain an increase in their rent," Peyton said. "In turn, this causes more housing insecurity."

Peyton said the project will also lead to further demolition of heritage buildings downtown. "A downtown should be lined with old buildings and character, the backs of which this city was built on," adding that she's also worried about the precedent being set by allowing structures to be built which exceed the city's height restrictions. "If I wanted to live in a sea of glass condos, I would live in Toronto."

Around a dozen businesses would be affected by the project, including the Uptown Theater, barbershops, Grand Theatre/Barrie Film Festival, Pay Day Loans, a cannabis clinic, and restaurants.

Cathy Colebatch, a longtime supporter of the city's heritage buildings, called it "overwhelming" to demolish an entire block to make way for such large structures.

"The massing and height of this building will dwarf everything in the surrounding area and across the bay," she said, adding she believes the project is "out of character" with the downtown.

Colebatch said she also fears that the project won't get built as planned, or will only include the initial phase, meanwhile leaving another large chunk of land vacant in the city's core, while the developers sell the units.

"Risk is huge for us in this city. Are we being realistic—or is this a pipe dream?" she asked. "We have so many vacant properties in and around downtown that are scheduled to be built out, but nothing has happened yet."

The tower project will have a “holding” provision to address items such as phasing and site-plan control. "There are some things that can be absolutely addressed through the hold," said Michelle Banfield, the city's director of planning and building services.

Colebatch said the project will also affect the city's culture, lamenting the loss of the Uptown Theater, which runs the Barrie Film Festival. "Does this landmark building and business not deserve to keep its home?"

For more on this story go to Barrie Today.