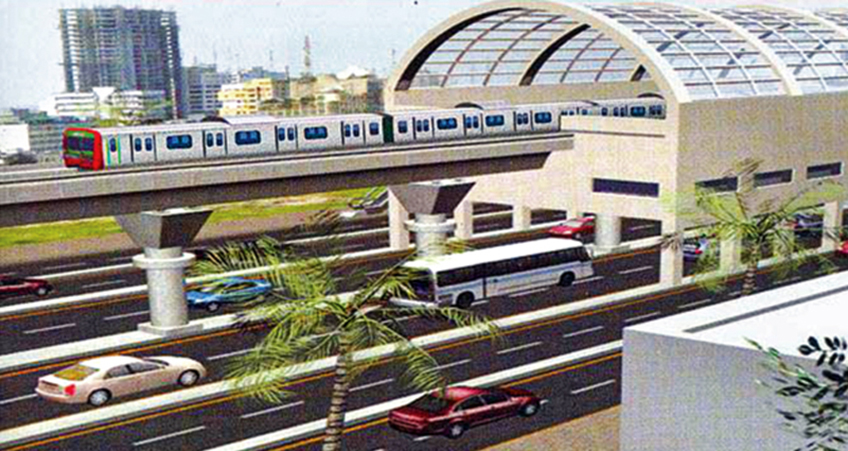 The Chennai Metro Rail Limited (CMRL) is planning to build a 20-story structure above the elevated depot station at Wimco Nagar with a four-level parking space below the stabling lines.
08 January 2020, Chennai, India

In a bid to integrate real estate and transportation, while generating non-ticketing revenue, the Chennai Metro Rail Limited (CMRL) is planning to build a 20-story structure above the elevated depot station at Wimco Nagar. The station is located in the Thiruvottiyur neighborhood and is about 600 meters away from the beach. There will be a four-level parking space below the stabling lines, and it is planned to be completed by December 2020.

"It could either be a residential or office space depending on the demand after the extension line is opened and the area develops. But it's going to be like a satellite city. We don't have a design for the structure yet, but we are laying the foundation for the structure now for future development," a metro rail official said. "Right now, the depot can handle all our 52 trains. We will need this second depot only when the trains get older and require frequent maintenance," the official said.

CMRL plans to build the high-rise above the elevated depot as the need arises to generate additional revenue. Similar structures are planned in the elevated depots to come up at Madhavaram and Poonamallee as part of a major expansion of the rail system.

"People think it's far away and don't like settling into these localities because of the lack of access through a proper transport system. With the metro, we are going to give more comfortable and faster access. We are sure the area will develop rapidly," an official said.

The elevated depot, with 16 lines and spread over 15,500 square meters is taking shape at a height of 12 meters. It rests on 1,161 foundation pile columns built underground and is connected with a 1.8-meter-thick concrete raft above which 324 columns of varying thickness have been constructed. Provisions have been made in these columns to build a four-level car parking space below the depot.

"It was a challenge building the foundation as the water table was as high as 2 meters. We had to drain it out," an official at the construction site said. "The foundation can hold a 60-meter-tall structure, which is about 15 to 20 floors. We are also constructing other facilities that can be used in the future when the high-rise is built," said an official.

At the depot level, there will be a small station, a training facility, and other amenities for the depot staff and train operators. The station, which is separate from the Wimco Nagar elevated station less than a kilometer away, could also be used by the occupants in the property developed in the future.

The 16 lines at the depot, including one line for the station, are linked to the mainline proceeding towards Wimco Nagar elevated station through a 600-meter link corridor. A 7.5-meter-wide internal road around the depot, stormwater drains, and a water tank with a capacity of 600,000 liters (159,000 gallons) will also be built. Another 10,000-square-meter area near the depot will be used to build amenities such as parking space depending on the requirement. This apart, a 1,055-square-meter auto coach washing plant will have three-levels for property development.

For more on this story, go to The Times of India.