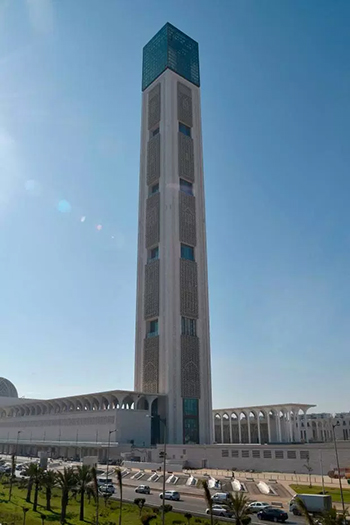 After seven years of construction and over $1 billion in expenses, a new mosque in Algeria may be set to break new global records.

The Great Mosque of Algiers, or Djamaa El Djazair, sits on an area of 400,000 square meters and has a 265-meter (870-foot) minaret that houses observation decks. The compound’s domed sanctuary and outside courtyard overlooking the Bay of Algiers can house up to 120,000 worshipers, and has an underground parking space with a capacity of 7,000 cars.

The mosque’s complex includes a Koranic school, a library, a restaurant, an amphitheater, along with a research center dedicated to the history of Algeria.

With its completion, the mosque will now be the world’s third-biggest by area and the largest in Africa. The two largest mosques are The Sacred Mosque of Mecca and the Prophet’s Mosque in Medina: both considered the holiest sites in Islam and accustomed by millions of Muslim worshippers and pilgrims every year.

The Algiers mosque constitutes a new feat for the China State Construction Engineering Corporation (CSCEC), a huge multinational conglomerate that is involved in building heavy industry and infrastructure in Africa and across the world. The company won the bid for the project of the Great Mosque in 2011, which was considered the largest of its overseas projects at the time.

However, following the global slump in oil prices, the mosque faced a budget crisis that precipitated delays in construction.

Yet for all the fanfare around the Great Mosque, the man who financed the ambitious project will not be there to see it fully open. President Abdelaziz Bouteflika resigned in early April amid discontent that his administration spent millions on vanity projects—including on megastructures like the Great Mosque—that diverted public money from creating employment and sustainable growth.

For more on this story visit Quartz Africa.