Tower to be Built Above Toll Road in Boston 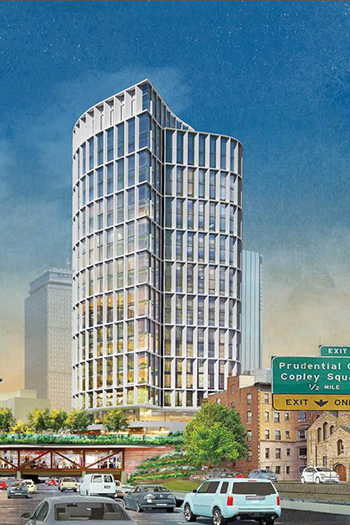 The first office tower to get built above the Massachusetts Turnpike in nearly 40 years could start work in early 2020, with a tenant in hand.

Online auto seller CarGurus, now based in Cambridge, has an agreement to lease a large portion of a new office building at the corner of Massachusetts Avenue and Boylston Street, part of a Turnpike “air rights” project that won city approvals earlier this year.

Two sources familiar with the deal said fast-growing CarGurus has a letter of intent to lease roughly 300,000 square feet (28,000 square meters) of the building’s 540,000 square-foot (50,000-square-meter) space. They stressed, however, that such a step is short of a signed lease, and either party could still walk away. Developer Samuels & Associates plans to start work on the two-building project in early 2020, and leasing materials say it would open in 2022.

“We have no signed lease for that space, and we never speculate on tenants,” said a Samuels spokeswoman.

Still, a deal would launch construction on the sort of project that has long eluded Boston developers. Not since Copley Place opened in the early 1980s has anyone successfully built above the Pike, though many have tried. The economic and engineering challenges of constructing towers above a busy eight-lane highway, commuter rail, and Amtrak lines are daunting.

Samuels & Associates, a veteran Boston development firm most recently known for remaking Boylston Street in the Fenway, won approval in August from the Boston Planning & Development Agency for a 20-story office tower and 13-story hotel on what’s known as “Parcel 12,” space above the west side of Massachusetts Avenue, between Boylston and Newbury streets.

With firm land on either side of the highway, experts say Parcel 12 may be easier to build on than some other air-rights sites. Samuels plans to put a two-story plaza above much of the highway itself, with the tall buildings pushed to either side of the site on land. Still, the project will be complicated. Numerous air rights projects, most recently a condominium tower nearby at the corner of Boylston and Dalton streets, won city approvals, but stalled as their cost and complexity mounted.

Samuels and engineers from the Massachusetts Department of Transportation have been working for months on a construction plan that, among other things, would aim to minimize the impact on traffic below. They say they’re confident they can pull off the project.

For CarGurus, the move would signal a significant expansion and a higher profile.

The company, which operates an online auto sales marketplace, operates out of three buildings in Canal Park and First Street in East Cambridge, leasing just under 150,000 square feet (14,000 square meters) in all, according to regulatory filings. The new tower would give it room to grow its employee count by about 730 across five cities in the US and Europe, and increase its visibility in Boston, as thousands of drivers will pass underneath it every day.

“That project will be like a new gateway to Boston,” said Meg Mainzer-Cohen, president of the Back Bay Association. “It’s a great big billboard for the city, and for whatever company goes in there.”

For more on this story, go to The Boston Globe.